Why Katie Hopkins Left The Sun

It has been one of those endlessly fascinating questions - why did pro-am motormouth Katie Hopkins and the Murdoch Sun part company? Her contract was not renewed, which was most convenient for the inmates of the Baby Shard bunker, but apart from the thought that her witterings were too toxic even for the paper of Kelvin McFilth, there was little to go on. 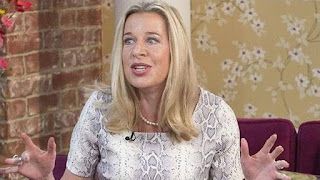 But now the eternally unrepentant Ms Hopkins has shed some light on the reason she and the Super Soaraway Currant Bun went their separate ways. In an article in Press Gazette, where she wheels out the old one about "I articulate views that a lot of people feel but feel that they can no longer say", she identifies the disappearance of Madeleine McCann as the one subject that neither the Sun, nor any other publication bar Mail Online, would allow her to broach.

This tells us several things not just about the sensitivities of Sun editorial staff - perhaps you thought they didn't have any - but also about the way the paper is put together nowadays, and the dangers in mentioning the McCann case.

Ms Hopkins has exhibited a tendency not merely to political incorrectness, but to give offence for what appears to be the sheer hell of it, although this may just be the disconnect between her world and the real one. Zelo Street has previously mused on the thought that some Sun pundits were not having their copy fact checked (pace Louise Mensch), and the possibility of Hatey Katey dropping the Murdoch doggies in the poo was clearly something about which they were uneasy.

Worse, most of those who scrabble around the dunghill that is Grubstreet have already overstepped the defamation line on the McCann case. So the nervousness is entirely understandable.

On top of that, there is the danger of disturbing the army of conspiracy theorists, trolls, oddballs and other assembled weirdos who prey on cases like the McCann disappearance. The pile-on from this motley convocation is something never to be forgotten.

But perhaps the most obvious reason the Sun would rather not discuss the McCann case is that there is very little of use to be gained by raking it over yet again. Katie Hopkins may have had a huge response to her latest rant on the subject, but the unedifying spectacle of a righteous and intolerant loudmouth putting the boot in on a couple who have already suffered years of torment was not one that even the Murdoch was prepared to entertain.

Whether Ms Hopkins gets that, I somehow doubt. But most human beings do - all too well.
Posted by Tim Fenton at 09:50

In fairness they were irresponsible parents.
Parents have lost their children for a lot less than what they did.

I agree with angry tensions.

Murdochs minions took the parents under their wing and I wonder if it is the real reason they've never been held to account.

There was this in the Mail last Feb, where she went as far as possible without inviting legal action.
http://www.dailymail.co.uk/news/article-3457221/KATIE-HOPKINS-ll-never-know-really-happened-Maddy-parents-accept-share-blame-let-go.html

If everyone gets fifteen minutes of fame, or infamy, let's hope that was hers.

Oh, I see.
I guess I'm flavour of the month again.

Still jealous of moi and my epic mailness ?

Do grow up dahlings.

One would never act as childish as some of you.

"Can you show me how to get, how to get to Zelo Street !"

I left the Sun because the dinner break wasn't long enough.

Hopkins is a piece of shit.

But there's nothing personal in this. It's her low life type I don't like.