Once again, despite the last attempt going so badly wrong, the Super Soaraway Currant Bun is trying to bring the Queen into an EU debate from which she has stood back, as is her right, and her inclination. “What Queen Asked Dinner Guests: GIVE ME 3 GOOD REASONS TO STAY IN EUROPE … Sorry Ma’am, we can’t think of ONE” froths the front page of today’s Sun. And, as the man said, there’s more. 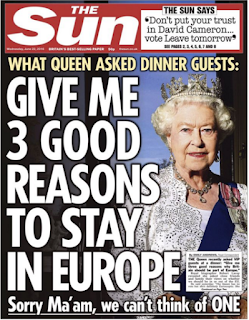 And it gets worse: “Mr Lacey said the Queen was questioning dinner guests, thought to include Prince Andrew and Princess Anne, at a private dinner a few weeks ago”. “Thought to include”? So he doesn’t know who was there. And it gets worse still: “’Give me THREE good reasons’ she has, apparently, been asking her dinner companions recently, ‘why Britain should be part of Europe?’”. She has “apparently” been asking.

So this is a guess at what the Queen has asked others on the occasions when she has invited them to dinner. As to the idea that Lacey is letting everyone know the Queen is for leaving the EU, he has also said “She’s playing it with a straight bat. She’s a very thoughtful Eurosceptic but whether that means she would vote in or out, if she could, does not necessarily follow”. There is, therefore, nothing to support that front page.

This means that the Sun has had yet another Clause 1: Accuracy moment, something that seems to be happening rather too often since Tony Gallagher was given the editor’s chair. And what the hacks have buried deep within the story is this line: “In his blog, Mr Lacey outlined the reasons why the Queen should support Remain”. Not only was he outlining why the Queen should not back Leave, the Sun had lifted the story from another source.

All that is different is that the Murdoch doggies have added a little speculation, along with the pretence of having the inside track on Royal matters: “The Sun told in March how Her Majesty demonstrated her strong feelings on Europe during a bust-up with Nick Clegg at a Windsor Castle lunch”. Yes, the infamous “QUEEN BACKS BREXIT” front page, which was so untrue that it provoked a complaint to IPSO from Buckingham Palace.

Not only that, IPSO actually upheld the complaint, so it’s a bit rich for the Murdoch mafiosi to try and make capital out of it. Nor do the Queen’s recent public pronouncements stand up the claim: as the BBC reported last year, she spoke “of the need for unity in Europe” and stated “division in Europe is dangerous”. The Sun has once again made a claim about the Queen that its story does not stand up, and another complaint could well follow.

Rupert Murdoch must be desperate to make things difficult for the Government. Perhaps that bid for the 61% of Sky he doesn’t yet own is closer than was thought.
Posted by Tim Fenton at 13:09

Not a very good Biographer if he stated the Queen does not have a vote.

She has a vote along with everyone else, but Constitutional concensus is the Monarch never uses it.

I would think HMQ, having seen service in WWII, would, like the rest of her demographic group, be in favour of Remain.

Has Trevor Kavanagh got masochistic tendencies?

Did he join IPSO simply to give himself more and more bollockings?

Maybe the Sun should get the barefoot guru Steve Hilton on the job. He is able to look into Cameron's soul and then tell us all (and Cameron) what the prime minister really believes about the EU. In this post reason age we should make more use of magicians like Hilton

Maybe a return to the days where Monarchs and generals ruled is necessary.

These Eton muppets are screwing it all.