Tory Bullying - After The Inquest

Yesterday, at Ampthill Court House, coroner Tom Osborne resisted all attempts to widen the scope of the inquest into the death of Tory Party activist Elliott Johnson, concluded that the 21-year-old had intended to kill himself, and that he therefore had taken his own life. Those in and around the party will now hope that no further damage limitation need take place, and they can get back to business as usual. 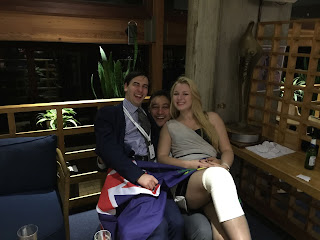 Indeed, the first sign that this was being spun as “move along now, nothing to see here” came remarkably swiftly, from the perpetually thirsty Paul Staines and his rabble at the Guido Fawkes blog, that well-known disownable branch of CCHQ, who told “Elliott Johnson: No Link Between Redundancy And Bullying”. That was all; we should now, in the words of the blessed Tone, just, well, hey, y’know, move on.

What the Fawkes folks fail to tell is that the link between now-expelled Mark Clarke was clearly demonstrated during the inquest, simply by reading out the redundancy letter Elliott Johnson received from Conservative Way Forward - the day after he and Clarke had an altercation. This is what that letter said.

“Further to your email exchange with our HR consultant, I was asked to review our operational requirements to establish your ways to limit your exposure to an external individual following an incident you described which occurred on 12th August 2015. As part of the exercise I have identified that there is a diminishing need for a dedicated political editor for CWF and therefore it is with regret that I write to notify you that your role is at risk of redundancy”. Thus bullying and redundancy are clearly linked.

Worse, the excuse given for Johnson’s redundancy, that CWF was in some kind of financial difficulty, did not warrant a mention. And that is just from a cursory glance: now that the inquest is over, those in the press who have been covering the wider story of bullying and misconduct within the Tory Party and its hangers-on will be free to shine a little light into those areas that have previously remained covered up.

Johnson’s father Ray has indicated that the inquest is only the first stage in what may become a very long journey. Private prosecutions are likely to follow. What not only Mark Clarke, but also a number of male Tory MPs, got up to at Young Britons’ Foundation and CWF gatherings, is also likely to come under the spotlight. The Fawkes rabble ought to know about these goings-on: they were the ones who first exposed them.

Now, all are expected to keep schtum and just move on. But it isn’t going to happen. Even the Tories’ own inquiry into the bullying scandal, widely expected to be a whitewash attempt, will not draw a line under the affair. The only unknown is just how many mainstream Tory politicians will get sucked in to the whirlpool.

Elliott Johnson may have thought he was a failure. But his death has let a genie out of its bottle, and no amount of whitewash is going to persuade it to go back.
Posted by Tim Fenton at 10:22

If they are as nice to their own people as that what chance for the ordinary pleb in the street?

For the sake of their peace of mind I hope Elliott Johnson's parents have the resilience, determination and courage of the Hillsborough parents.

But we've been here before. We know how the system "works."

First it lies. Then it ignores. Then it distorts. Then, if you're lucky, eventually, it gets caught. And all the while, mainstream media does fuck all.

It gets whiffed at then put on back burner then lots of 'Lets look over there's bollocks (could last up to 3 decades) then lots of faux shock horror and conspiracy forums (which chat lots of shite) then another shed load of officials being disgraced out of a job in old age.

You know, the usual.