When questioned by the host last Sunday on The Andy Marr Show (tm), Michael “Oiky” Gove was unequivocal in his disdain for the poster unveiled the previous Thursday by UKIP leader Nigel “Thirsty” Farage, suggesting that lots of Scary Brown Muslim refugees were all coming to Britain. That poster, Gove asserted, had made him shudder. Vote Leave, the mainstream Out campaign, was clearly above such behaviour. 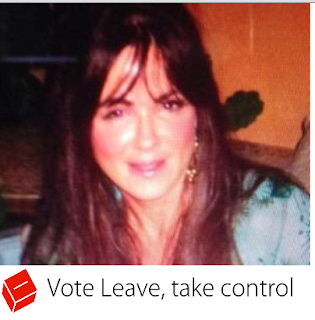 But sadly this was not entirely true, as we discovered yesterday when Vote Leave board member Arabella Arkwright resigned after she was caught by the Guardian Retweeting some highly dubious content (her Twitter account has since been deleted). The material included “an image of a white girl in the middle of a group of people wearing burqas saying: ‘Britain 2050: why didn’t you stop them Grandad?’”

It got worse. “Other retweets included a link from Tommy Robinson, the founder of the English Defence League, suggesting UK Muslims were trying to build an Islamic state in Britain … Another retweet came in response to a Twitter user saying they would never eat tikka masala again if it ‘got seventh-century barbaric savagery’ out of Britain. A reply from Arkwright’s account said: ‘No to sharia law. By by [sic] tikka masala’”.

And it got worse still. “A further retweeted picture has a ‘Stop Islam’ badge in the corner and asks people to compare photographs of Yazidi women and Syrian men fleeing Isis”. Not surprisingly, the Remain camp was not impressed: “Labour MP Emma Reynolds said some of the material was racist and the Lib Dem leader, Tim Farron, called on Vote Leave to take action to stop stoking divisions”. Ms Arkwright was swift to excuse herself.

“I am absolutely appalled that there should be any underlying suggestion that I have any racist tendencies” she claimed, before going all defensive: “I would like to make it absolutely clear that my RTs and forwarding do not mean that I endorse in any way the content of them. I RT a wide variety of different views on issues related to the referendum with which I do not agree in order that others can see the breadth of opinion on these matters. Is there anything wrong in that?”

You didn’t get that? “You will note that my RTs are seldom accompanied by comments from me except Syrian Christians, who it was being widely reported at the time were being tortured for their faith. I am not a political animal and maybe am guilty of being naive, but I reject all prejudice and am deeply sorry for any offence that may have been caused. Moreover, perhaps I can be clear, I ABHOR ANY FORM OF RACISM”.

You may not have read about this embarrassment for the Leave campaign. Why should that be? Well, apart from the Guardian, most of the press - including all of that which is backing the Leave campaign - has ignored the story. You can see an account of the news at Politics Home, and also at ITV News, but after that, there is nothing.

Not that they’re trying to hide the reality from their readers, of course. Perish the thought!
Posted by Tim Fenton at 08:57

" UK Muslims were trying to build an Islamic state in Britain..."

Leaving aside all the mad racist hatred - if you can - the problem is this has an element (and only an element) of truth in it for those at the extreme edge of Islam.

But the same is true of any nonsensical superstitious religion. This country is what it is in large part because of not-so-long-ago religious influences. Northern Ireland, anybody? Scotland? Welsh chapel? English Protestantism or Catholicism? Henry 2nd? Henry 8th? Carson?.......It is the business of organised religion to peddle its anti-humanist claptrap wherever it can. What do you think those unelected bishops are doing in the House of "Lords"?......And as for the US christian loonies.......

I am quite sure there are a few benighted Brit madmen who want to impose Sharia law. Yet I'm willing to bet their numbers pale into total insignificance compared to the number of christian crackpots who infest our political system - and others elsewhere in the world.

The sooner we're rid of the organised occult medieval bullshit of all religions the better for the human race. But let's put our own house in order first.

The perils of language. "An Islamic state" has been taken to mean what we see from IS/Daesh/whatever they're calling themselves - AK47s firing in the air, fanaticism, mad buggers out in the desert, and all the rest of it. Of course, there are plenty of Islamic states around the world. Iran's one. So's Saudi. So's Jordan, and rather nice it is too (comparatively). So's Malaysia. So's the Maldives (if they're still there).

But yes, as one of the few countries to have unelected clerics making laws, we're hardly in a place to criticise others for wanting a theocracy.

Been writing a poem/rap about myself.


I won't have a job when they shut down my blog.
Can't be a lazy slob, have to get a real job.

Can count on the wife to bring home the cheese
I can't drive her car even if I say please.

Can't be a mole when I'm living on the dole
I never really was, just a label that I stole.

Doing all those chems sent my mind round the Bendz.
I'm bitter and I'm sad like the Jacko I am bad.

Can't be a big slob when you haven't got a job
Get a real job and learn to shut me gob.

Working for the media I could write encyclopaedias on the crap that I know
But I'll leak it very slow.
It's coming to an end, Leveson is not my friend.

Gotta get a job where I can't steal and I can't rob
Gotta earn a days pay and do it someone else's way.

I could sell all my houses and my wife's blouses
But I'll wear them in the club and on Thursdays down the pub.

Then I can retire and have another rest.
Gonna sit on my porch in my tatty, stringy vest.

The Yazidi/Syrian/Stop slam picture was a re-tweet of David Vance.

David Vance is not a nice man.