Today’s Sunday Times, as befits part of the Murdoch empire, has concocted the suitably frightening story “Leaked UK plan to open doors for 1m Turks … Proposal under wraps until after EU vote”, from the paper’s political editor Tim Shipman, who has become so convinced of his story’s importance that he has even taken the host to task for not raising it with Young Dave on The Andy Marr Show (tm). 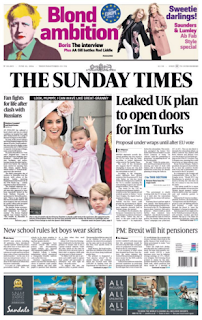 Why might Marr have taken this steaming pile of bovine by-product less than totally seriously? Why, moreover, did the Guardian’s resident sage Michael White take such a dismissive line on it, telling “Sunday Times ‘secret, leaked documents’ story total bollocks, you only have to read it”? This is not difficult to explain, not that Shipman, an immodest man with much to be modest about, will appreciate the analysis. 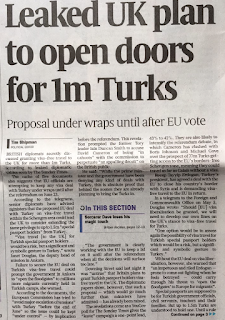 Here is the opening of Shipman’s piece: “BRITISH diplomats secretly discussed granting visa-free travel to the UK for more than 1m Turks, according to leaked diplomatic cables seen by the Sunday Times”. Well, they wouldn’t be discussing anything contained in diplomatic cables in public, would they? But do go on.

“Diplomats have advised Ministers that the proposed EU deal with Turkey on visa-free travel within the Schengen area could lead the UK to consider extending the same privilege to up to 1.5 million ‘special passport holders’ from Turkey”. “Could lead to”. “Up to 1.5 million”. So there is the equal possibility “Could not lead to”, along with the rather obvious point that “Up to” includes the figure Zero.

Why won't anyone listen to Me?

Compare and contrast with the hysterical response from Iain Duncan Cough: “this is absolute proof that behind the scenes they are planning to bring the Turks in … The Government is clearly working with the EU to keep a lid on it until after the referendum when all the decisions will surface too late”. But, as Captain Blackadder might have said, there was only one thing wrong with this idea - it was bollocks. 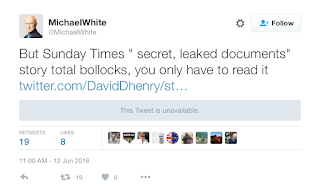 An honest assessment spells it out ...

Let’s take this nice and slowly: visa-free travel is not “opening doors” to anyone. All it means is that visitors do not need a visa to travel. No permission to stay, far less work or live here, is granted by allowing that travel. It gets worse: diplomats, whether in Ankara or elsewhere, may have the means to advise Ministers, but that is all they have. They are not part of the Government, and so do not make policy. 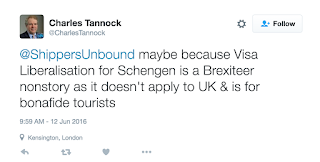 ... and a Tory MEP underscores the analysis

All that Shipman can point to is that someone in the diplomatic service made some observations and suggestions in a cable to London. Indeed, 10 Downing Street has said in response to Shipman’s prompting “These are selectively leaked quotes from diplomatic telegrams designed to give a completely false impression that the UK is considering granting visa liberalisation to some Turkish citizens. That is completely untrue”.

So Michael White was right to dismiss the piece, and Andrew Marr equally so for not bringing it up with Cameron, although the whole exercise satisfies, for Shipman, the demands of His Master’s Voice - so that’s all right, then.
Posted by Tim Fenton at 16:51

I wonder if by any chance they are related?

In any case, the Telegram refers only to "Special Passports" - that is diplomatic and official passports. So there is even less for Shipman to go on.

It is, as my old Mum would say, a load of nowt about nowt.