As I told yesterday, Rupert Murdoch has decreed that his chosen replacement for Young Dave is London’s formerly very occasional Mayor Alexander Boris de Pfeffel Johnson: only in the Westminster bubble is it considered fine and dandy for an interfering foreigner to tell us who should occupy 10 Downing Street. The confirmation of Don Rupioni’s backing has been confirmed by laudatory coverage in the Super Sparaway Currant Bun. 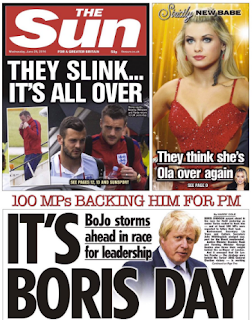 And today has brought forth the claim of an “exclusive” telling readers “100 MPs Backing Him For PM … BoJo storms ahead in race for leadership … IT’S BORIS DAY”, under the by-line of Bozza’s very own Mini-Me, the Sun’s alleged “Westminster Correspondent”, Master Harry Cole. It was enthusiastic. It was gushing. It was just what the boss ordered. But there was little about it that was exclusive.

Some of the article looks all too familiar, from the very first line, “SENIOR Tory Ministers last night threw their weight behind Boris Johnson  in a bid to crush an ‘Anyone But BoJo’ stitch-up led by bitter Remain MPs”. Yes, anyone not backing Bozza is “bitter”, rather than not wanting the country to be led by an unprincipled, incompetent, philandering liar. But the idea of heading off a challenge had already been broached at the weekend.

You think I jest? Have a look at this wording: “Boris’s team have not only been very active, they are trying to sign up as many MPs to their cause as possible in order to put off rivals from even bothering to stand”. That says more or less the same thing, albeit without over-egging the pudding by making claims about ministers and kicking anyone who didn’t vote the way the Sun wanted in the EU referendum.

That was posted just before noon on Sunday by pundit and broadcaster Iain Dale, who on this occasion rightly claimed an exclusive for it. Master Cole has effectively ripped off Dale’s central point, and he hasn’t even managed to copy and paste the names of Bozza’s backers properly (for some reason, Cole’s list misses Jesse Norman, who chairs the Commons Culture, Media and Sport Committee).

It gets worse: “Remain-backing party grandee Sir Nicholas Soames shocked Westminster as he sensationally also sided with Boris”. There’s nothing “exclusive” about that, Soames let it be known over an open Twitter feed. And worse: “Last night it was even suggested pro-EU Energy Minister Amber Rudd was poised to endorse BoJo despite recently savaging him in a referendum TV showdown”. That’s just speculation.

But we do get an admission that the Sun is about to indulge in an act of routine hypocrisy: “Boris was said to have ruled out  a snap general election in the autumn in a bid to win over wavering MPs”. After Pa Broon entered Number 10 in 2007, he was berated by every right-leaning paper in the country for being an “Unelected Prime Minister”. So it’s good of Master Cole to let us know about the upcoming exercise in double standards.

Pity about the “exclusive” being nothing of the sort, though. No change there, then.
Posted by Tim Fenton at 09:38

"It was enthusiastic. It was gushing. It was just what the boss ordered."

Nearly spilt me brekkie coffee everywhere with that one.

But I doubt if it helped the Murdoch-Rothermere jobsworths. When they wake up each morning and open their eyes it's still the best they get all day.

Then they have to look in the bathroom mirror and see a Nazi gobshite staring back at them, go to "work," and peddle Murdoch-Rothermere lies and propaganda. It's difficult to list a worse gang of tenth rate cowards.

Which is why I won't have a scrap of sympathy for them when they get sacked and join "the labour market." I wouldn't trust any of the corrupt arse heads to brush my path.