After all the efforts of the Murdoch press and its cheerleaders failed to stop the new series of BBC Top Gear from airing - on schedule - last Sunday, one might have thought that this particular barrage of creativity from the Baby Shard bunker would come to an end. But that thought would have been misplaced, as the Sun has, once again, cobbled together another “exclusive” on the show based on little more than the hacks’ imagination. 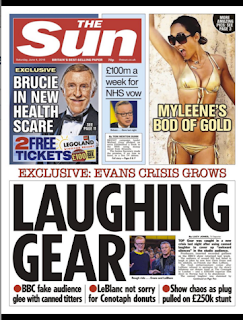 WAAAH! WAAAH! It's not fair!

Lucy Jones’ article is so clearly the product of invention - that means it’s not true - that not even the Sun’s own choice of photos stands up the claims being made. After saying that producers “inserted canned laughter … Recordings of people hysterically laughing had to be inserted into the critically panned first episode of the BBC2 motoring show when the around 500-strong large crowd failed to laugh at jokes by new presenter Evans and his sidekick Matt LeBlanc”, you need only look at the photos.

The one captioned “Fake chuckles ... studio audiences stayed silent during series premiere” shows the audience members behind Chris Evans laughing. A photo captioned “Desperation ... Evans forced to plead with the dead-pan crowd” shows the audience applauding. The one claimed to show “Audience members slam the production ... 'there were so many long, awkward silences’” shows Evans in full flow (ie not silent). 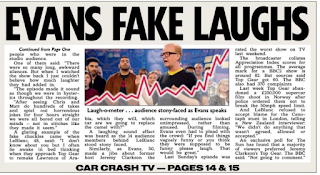 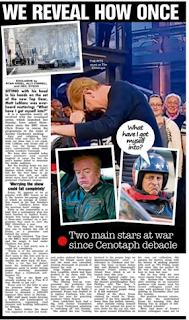 And it gets worse still: the choice of words has clearly been run past the Sun’s lawyers, and it shows. Hence we read “One guest in attendance said: ‘There were so many long, awkward silences. But when I watched the show back I just couldn’t believe how much laughter they had added in’”. One guest in attendance. That’s code for “we couldn’t find a real audience member to ask, so we made it up”. 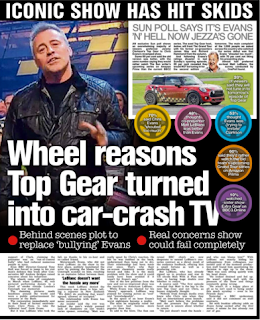 WAAAH! WAAAH! We want Jezza instead!

That the “One guest in attendance” is the invention of the Sun newsroom is given away when they tell “After seeing Chris and Matt do hundreds of takes and spiel out horrendous jokes for four hours straight we were all bored out of our minds”. Two things here. One, it took Clarkson and Co four hours to get an edition of Top Gear in the can. And two, if there had been “hundreds of takes”, it would have taken a lot longer.

Also the product of invention is a supporting “exclusive” article claiming “Warring hosts and behind-the-scenes plotting: We reveal why Top Gear has turned into car-crash TV”. This is almost completely dependent on those trusty stand-bys “An insider” and “A source”. This means the hacks can make it up to order. But we do get the hot news that there are “bookies offering odds on Evans being sacked after the first series”.

If only they sacked Sun reporters every time they lied. But then, there would not be any Sun reporters left after a couple of weeks.
Posted by Tim Fenton at 11:02

People might start thinking that Murdoch is annoyed his moles departure from the BBC is hurting him......

And Evans will still pull a bigger crowd than the Murdoch spivs can manage - on Sunday evening and Monday morning.

Oh, but how that must be bruising to their arrogant egos.

No member of a studio audience could possibly have said anything like that.
I was on Fifteen to One in the early nineties. One losing contestant tripped and almost fell over a trailing cable, and had return and walk off again for a retake. Another had to be re-filmed giving the same wrong answer for some reason. The polished final result looks totally different, and for good reason.

But we do get the hot news that there are “bookies offering odds on Evans being sacked after the first series”.

And bookies are also offering odds on an alien invasion

"‘There were so many long, awkward silences. But when I watched the show back I just couldn’t believe how much laughter they had added in’”

If the source turns out to be an actual real person (...), you can bet that this was their first time in a studio audience. This is, of course, The Sun relying on most of their readers not knowing that the recording of *any* scripted TV show with an audience present is full of long silences and localised bursts of laughter being raised in the final mix (or even taken from another gag which got more laughs). It's called editing.

Not that any sort of 'professional creativity' ever occurs at the Baby Shard, of course...

What are the odds on Sky bets?

I couldn't give a shit about Top Gear.

But I'm absolutely thrilled it's driving Murdoch and his jobsworths up the wall, across the ceiling, down the other wall......and then repeating the circuit ad infinitum.

It's worth keeping the programme on for just that hilarious sight.

Imagine meeting one of Murdoch's guilty jobsworths somewhere. It'd be worth it just to laugh in his/her lying face.

They might have said it if they were a plant.

As for 'Sources' without verification they can make up any old shit or tap into coms and use that as a source Without actually identifying the source to anyone.

Or, hacking as it is known.