As the time approached for the last Prime Minister’s Questions before next week’s referendum on Britain’s membership of the EU, a flotilla of boats made its way up the River Thames. On board were luminaries of UKIP, including Nigel “Thirsty” Farage and his sole Scottish elected representative, MSP David Coburn, who makes up for the lack of seats by needing four of them every time he sits down. 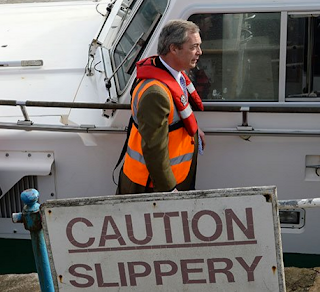 Also in attendance, and definitely not campaigning for Britain to leave the EU, were professional heckler Bob Geldof and his pals on a rather bigger boat than Mr Thirsty could manage. Not only that, Geldof was in control of the loudest sound system, so whenever Farage tried to give the waiting media an interview, his words were drowned out. There was also a small grouping of dinghies loyal to the Remain camp.

So far, so amusing, and there was some heckling and gesticulating, including Geldof flicking the V at Farage, as well as both men suggesting emphatically that the other had a tendency to stimulate himself by hand, clearly learning lessons from the late night clash between London’s former and very occasional Mayor and a disgruntled cabbie, who had informed Bozza loudly “you’re one of them, mate”.

But no event of this kind has any value as political currency unless it can be framed and presented in a way that puts the other side in the worst possible light, and so it was that the photo of Geldof giving Farage the gesture that was definitely not what Winshton intended was portrayed as a “Rich Man” mocking “poor fishermen” who were under the jackboot of the dastardly Common Fisheries Policy.

There was, though, as Captain Blackadder might have observed, only one thing wrong with this idea - it was bollocks. As the Independent has observed, “A flagship of the pro-Brexit flotilla currently sailing up the Thames was involved in the UK’s largest ever frauds involving illegal catches of fish, it has emerged”. And there is more.

“The Christina S, a 72-metre-long pelagic trawler, is one of two largest vessels taking part in the river protest organised by Scottish skippers heading to Westminster to call for the UK’s withdrawal from the EU … But in 2012, skipper of the boat Ernest Simpson, 65, and his son Allan, 43, were fined £65,000 each illegally landed mackerel and herring worth a total of £2,031,501. The pair also had to pay ‘proceeds of crime’ confiscation orders of over £360,000”. And the boat’s current owner is worth over £100 million.

The ultimate owner? “Andrew Marr [no relation] International, which controls 12 per cent of all UK fishing subsidies through a series of subsidiary companies”. So an easy hit for the Greenpeace rep to comment “A trawler once involved in Britain's biggest fishing fraud and now owned by a Sunday Times Rich List millionaire is an unfortunate choice to lead a flotilla supposed to represent a fishing industry on its last leg because of Brussels”.

Dead right it is. Poor downtrodden fishermen my arse.
Posted by Tim Fenton at 16:41

Branson might be a bit richer than Farage, but his question about the kipper's poor attendance at the Europarliament's fisheries committee (1 out of 43 meetings) could have done with an answer.

If Farage is so concerned about the EU and fishing, maybe he should have turned up to the dozens of votes on the subject that he somehow never found time for. Of course, that would have meant working for his MEP salary...