GMB – Mail Makes It Up

Like nature, the press abhors a vacuum. There are newspapers and websites to fill, and so there must be content. There are also agendas to push. The result? If there is no actual news available, it just gets made up anyway, or on the flimsiest of pretexts. This takes us back to ITV’s new breakfast offering Good Morning Britain, which is back in the news because the press decrees that it should be. 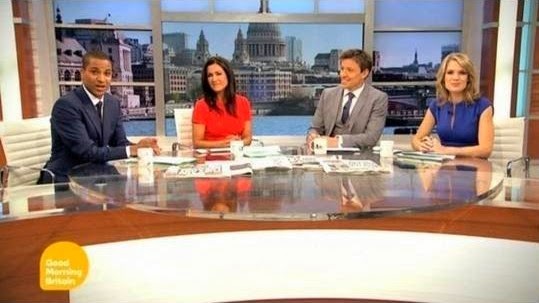 Actually, make that just one paper: to no surprise at all, the legendarily foul mouthed Paul Dacre and his obedient hackery at the Daily Mail have gone after GMB, and more specifically presenter Susanna Reid, on the basis of two totally fictitious premises: one, that she has become desperate to improve the show’s ratings, and two, that there is disharmony between her and one of her new colleagues.

Why that should be I will leave until later, but let’s look at the excuses that underpin the Mail’s attack. After having all GMB’s four presenters papped on arrival at work – which revealed little, except that the programme’s transport provider runs a fleet of Mercs – it was left to the Daily Star, and the creative journalism of showbiz man Nigel Pauley, who can’t count (she’s got three sons, not two), but spins well.

“GMB, which launched on Monday with 800,000 viewers, has been shedding 100,000 a day, plunging to just 600,000 on Wednesday” told Nige, not letting readers know that it added another 140,000 the next day. So what happened next? “With the ITV show’s audience switching off in droves, presenter Susanna hitched her dress a little higher to show off more of her shapely pins”.

Yeah, right. This is, let us not drive this one around the houses too much, complete and steaming bovine by-product of the most pungent kind, but the seed had been planted, and Mail Online was away. “Susanna Reid accused of showing off her pins in increasingly shorter outfits to help boost Good Morning Britain ratings” howled the headline, before readers were told how to buy an outfit like it.

So there’s the first false premise. And today has come the second: “The vicar's daughter stealing the show from ITV's £400,000 Susanna Reid - and her shrinking skirts”. Yes, the first whopper has now become the accepted wisdom, and is added to a wholesome tale about Charlotte Hawkins. This is then inflated to become full-blown rivalry, and Ms Hawkins is asserted to be winning this imaginary battle.

Then comes the dark hint: “there are already whispers about some tinkering with the format”. D’you know what, Dacre doggies, I’ll let you into a secret: whatever it entails, it won’t include Roland Rat. And the reason for the Mail’s attack on Ms Reid? Dacre has decreed that she’s too ambitious and needs pulling down a peg or two. He has decided that she is not a suitable example to put before Daily Mail Readers.

So here’s hoping the ratings start improving. Dacre should have retired last year.
Posted by Tim Fenton at 11:01

Lest we forget La Reid was once employed by the hated BBC and helped build a regular breakfast audience twice that of ITV's offering. I watched about ten minutes of GMB and it is so lightweight it defies gravity. To be honest it was the same mix of 'coming up next', adverts, some bloke who was doing some OB with prizes to offer and a phone-in competition with big money prizes but charging a big whack for the phone call.

Thanks for this post! I have also noticed this constant attack on Susanna Reid and was wondering if the author of most of them, James Tozer, has some personal vendetta. Like Neil, I suspect it is linked to the Daily Fail's hatred of the BBC and ambitious women in general, but their hatred of Susanna goes back a long way - there are similar articles about her on Strictly Come Dancing and BBC Breakfast.