Littlejohn Reinvents The Past

Today, the Daily Mail brings deeply unsettling news for its devoted readers: starting next week, the paper will serialise the supposedly Very Wonderful memoirs of their talentless and unfunny churnalist Richard Littlejohn. The modestly-titled “Littlejohn’s Lost World” tells of a time when everyone worked hard and wanted to get on, there were none of those immigrants, and no elf’n’safety. 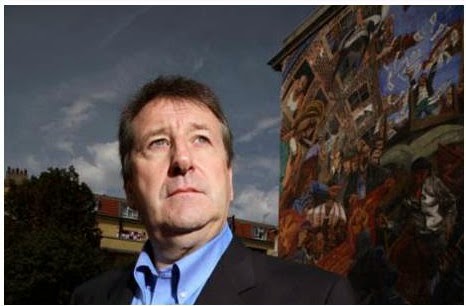 Ah, how wonderful that must have been – not. Fortunately, being of A Certain Age, I am able to subject Dicky Windbag’s hot air to the harsh reality of factual analysis. So let’s start at the very beginning – a very good place to start. “The Mail's incomparable columnist, born before welfare dependence, immigration and elf'n'safety asks: 'What would my old Dad make of the country we've become?'” he asks.

Well, in Dick’s case, what he has become is a peddler of rank dishonesty: the Welfare State pre-dates his birth, as does significant immigration. Or did he miss events like the arrival at Tilbury of the Empire Windrush? He does get one thing right, though: rationing was still in force when he was born. But it ended before Winshton retired as PM and Anthony Eden won the 1955 General Election.

“In those days, most babies were born at home, not in hospital” he says, from his own particular Sample Of One. Well, Dicky Boy, my Sample Of One from later in the same year somewhere near Leeds says otherwise. “I was born into a lost world. It wasn’t just another century, it was another country”. Wrong. It was the same country as today, but we have in the meantime enjoyed something called progress.

What Littlejohn fails to tell readers about the wonderful fifties is that life expectancy was poor – heart disease killed many before they got the chance to retire, lung cancer and other respiratory ailments took more, and tuberculosis was rampant. He (and I) were the fortunate ones. And don’t get me started on the filthy air in cities and towns – and the illnesses that caused in its turn.

Dick tells that “no one suffered from now-fashionable food allergies”. Yes they did – only back then, they fell ill or just dropped dead. “Holidays meant a trip to Southend in a Ford Anglia” he says, which meant his family were not as ordinary as he would like to pretend: very few could afford a car. And where would you prefer to take a holiday – Essex or Andalucia? Seriously?

If I were given a choice of the 50s or the here and now, it would be a no-brainer. The world today has its faults, but has changed vastly – and for the better. This is my time, thanks. The 50s are mere memory. “Critics of my column in the Daily Mail probably won’t be surprised to discover that I’m descended from a family of London cabbies” says Dick. Meaning a bigoted and dishonest gobshite.

And an appallingly selective and unreliable witness to the past. One more for the bin.
Posted by Tim Fenton at 10:50

Littlejohn Senior, circa 1936: 'Ere, d'you know oo I 'ad in the back of me cab last week? That Oswald Mosley, that's 'oo. Great bloke, spoke like what we do darn in the Pony and Trap Inn. Bloody Joos, comin' over 'ere an' takin' our jobs. An' do you know wot? They slit animals' froats wivout stunnin' 'em first. Barbaric that's wot. An' they won't 'ave no bacon butties in their caffs. Make no mistake mush, yer wouldn't catch me in one of their caffs, s'all kosher this 'n' kosher tha' an' all.

Anywhichwayup, did you 'ear abart them lefties 'oo tried to stop Oswald an' 'is mates 'avvin a quiet stroll through their own city. Just cos tha's where the Joos live the lefties kicked up.

I remember when I was a lad back in the 1890s Britain was Great Britain not 'ow it is now. My ol' man was in the trenches y'know and 'e never came back, shot for desertion some say but 'is mates in the firin' squad were proud to have shot 'im they reckons. An' 'e would not recognise the place now people can't speak their minds can they?.

And, of course, the much maligned "elf and safety" has ensured there are far, far fewer industrial accidents than there were back in the bad old 1950's

47 kids in my primary school class

No car; no fridge

Coal hole in the kitchen

Mind you I did live north of Watford then.

Perhaps if he worked in a real industry instead of newspapers he might have been glad of some safety rules. Here in Crewe we still have "Crewe Works disease" funerals every week adding to the hundreds and hundreds of others over the past couple of decades. Maybe we should have a memorial erected.