“Blimey, they’re made for each other ... lying scumbag Chris Huhne has been to visit sex abuser Max Clifford in jail, according to [The Times]” tweeted Neil “Wolfman” Wallis the other day. Moving right along from the thought that Wallis might not be best placed to call anyone a “lying scumbag”, the former executive editor of the now-defunct Screws and Cliffus Maximus have what is generally called previous. 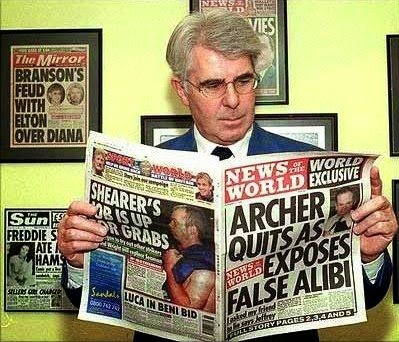 Wallis was a long-standing client of Clifford: given the nature of the product on offer from the latter, and Wallis’ standing in the Sunday red-top arena (he was editor of the People for five years before re-joining Rupe’s downmarket troops in 2003), this could hardly be otherwise. And it was Wallis who made the move which caused significant financial discomfort to Clifford.

As Media Guardian pointed out at the time, “When Westlife star Bryan McFadden had a one-night stand with lap-dancer Amy Barker on his stag weekend, Clifford got Jeffrey Green Russell to draw up a deal with Westlife's management, paying Barker £15,000 to sign a confidentiality agreement”. Thus Max thought he had it all tied up, and the principals could only work through him. 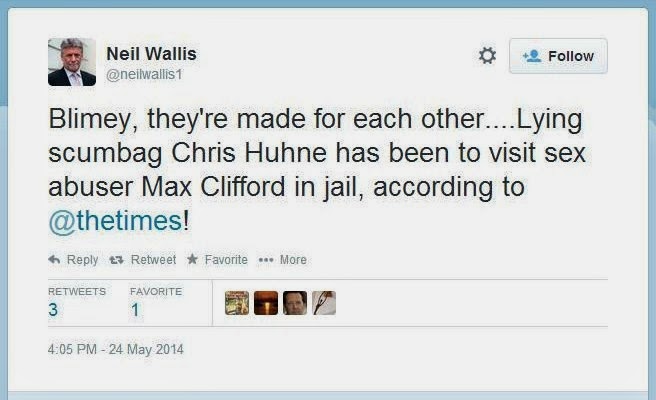 But Wallis – who was already pissed off with Clifford for going to the Screws before offering the story to the People – dealt directly with Ms Barker, leaving Mr Sleazebroker high and dry. His comment was that “I don't blame the girl ... The people I blame are the lawyers and Neil Wallis”. And it seems that Clifford had a long enough memory to get payback when the opportunity arose.

When former Metropolitan Police Commission Paul Stephenson resigned back in 2011, Clifford was on hand to pontificate: “I think the whole thing is getting more and more serious ... we need to know exactly what went on and so, in terms of Rupert Murdoch, I find it staggering that the BSkyB deal was going through ... It is only because of Milly Dowler that politicians are now standing up”.

There was a very good reason that Max was suddenly very interested in the whole sordid business: Stephenson told the media that “I have taken this decision as a consequence of the ongoing speculation and accusations relating to the Met's links with News International at a senior level and in particular in relation to Mr Neil Wallis, who as you know was arrested in connection with Operation Weeting last week”.

Wallis had been retained by Stephenson as a PR consultant. He has since been advised that no charges will be brought against him following the arrest and repeated subsequent bailing. But he is clearly sore that Clifford chose to occupy the moral high ground and denounce him, however obliquely. Hence what looks on the face of it as a singularly ungrateful piece of behaviour.

There’s no honour among thieves – or, indeed, within the Fourth Estate, it seems.
Posted by Tim Fenton at 17:30

Daniel Morgan about to blow wide open, you heard it here first;)

Yes, it is reported that he claimed "found innocent" although the CPS used the phrase "insufficient evidence to prosecute". Not quite the same thing is it?