Boris Lord Of The Rings Fail

London’s occasional Mayor Alexander Boris de Pfeffel Johnson, as is well-known, enhances his income from pretending to run the capital with £250,000 of “chicken feed” from the Maily Telegraph. But, as I’ve pointed out before, being bunged £5,000 for every one of his columns does not guarantee that he can be arsed doing the most elementary research. That tradition continues. 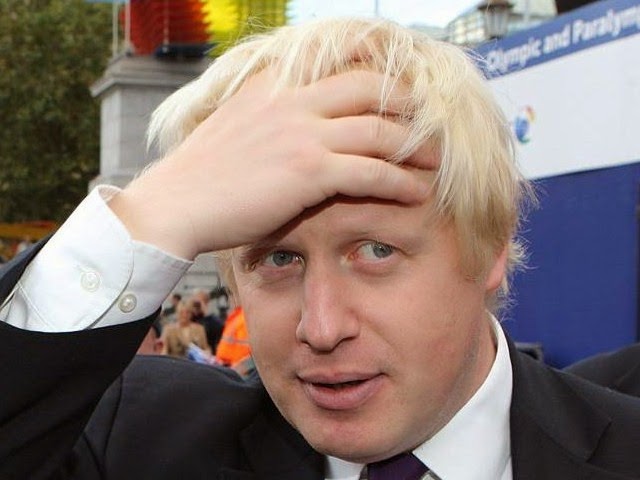 Lord of the Rings? Have I read that one? Cripes chaps, Beano Boris can't remember! Oo-er! Better make it up anyway, eh readers? Yikes!

Bozza’s latest effort revolves around his attempts to kick Mil The Younger, telling readers “The economic sunshine has left Miligoblin groping in the dark ... Voters are learning to ignore this croaking, complaining creature as it scuttles around beneath the toadstools”. How frightfully witty, er, not. Where does he get this “Miligoblin” idea, anyway? Is there a book or film to which he is alluding?

“It is a long time since I read The Lord of the Rings, but I have a feeling that there was a character – some goblin or twisted elf – who disliked the sunlight. He was fine at night, or when he was concealed in the roots of a mountain. But as soon as he felt the daylight upon him, he would writhe and moan and generally come over all queer. That is a bit like how it is with poor old Ed Miliband”. Crikey readers!

Yes, Bozza gets £5K for this rubbish, but you can forget any preparation or fact checking. But he does have good news to tell us: “Things are blooming in unexpected places. People are being hired to do jobs in sectors that barely existed a few years ago”. Yikes! Beano Boris caught making another column up on the fly! What will Dave say? [He’ll say Bozza’s a twat, just like he usually does]

The point of the piece is to rubbish Labour’s ideas: “First, he noticed that people were fuming about their energy bills. So Labour offered to freeze them ... And for a while, it worked – until people started thinking about it”. Yes Boris, it was so rubbish that the energy companies have taken up the idea themselves. So that’s not a very good way to kick the Labour leader, is it?

“Meanwhile, the economy kept getting better” he prattles on, and maybe for those able to trouser £5K for a weekly column of crap, this is true. It’s stuff all comfort for those out of work, or, perhaps more importantly, who haven’t had a pay rise for several years, while prices have been rising inexorably. But, as the man said, there’s more: he then goes on to rent controls.

“Almost as soon as Miliband started promising to cut rents, people saw that he was talking nonsense ... The last thing the people needed was some Venezuelan rent-control system”. What has been proposed is hardly the stuff of nightmare socialism, and is playing rather well, but Bozza is on autopilot, phoning his column in after assembling it from stock phrases and soundbites.

That means there’s one worker whose productivity hasn’t improved for years. Him.

[UPDATE 6 May 0920 hours: cartoonist Martin Rowson has noticed something rather more disturbing about Bozza's characterisation of Miliband: the overtone of anti-Semitism.

As he has noted on Twitter, there is a full "lexicon of tradtional anti-Semitic tropes: gnome, goblin, hiding from sunshine etc ... I wonder why". I don't wonder why at all.

The problem for the right-leaning press is that Miliband's Jewish heritage is somewhere they cannot go, well, not directly, anyway. The Mail got into trouble when it talked of "The jealous God of Deuteronomy" and "visiting the sins of the father on the sons" when trying to attack Miliband through his late father, but, it seems, the attempts to "go there but not look as if they are going there" are continuing.

What you will not hear Nick Ferrari asking Bozza on LBC this morning. No change there, then]
Posted by Tim Fenton at 17:35

So how does the blustering bonking bonkers blond bombshell get on with Michael Gollum, sorry Gove, then?

Surely the creepiest creature around must be that guy who avoids sunlight (aka transparency) by hiding behind trees and getting his Spad to carry his can. While the NHS burns the hunt is on for a lambada.