UKIP – The Carnival Is Over

The campaigning in advance of elections to the European Parliament (EP) is drawing to a close, and for one party it seems to have come to a juddering halt, as Nigel “Thirsty” Farage and his fellow saloon bar propper-uppers at UKIP have encountered a little local difficulty in the south London satellite town of Croydon this afternoon, where they had planned a carnival-style event. 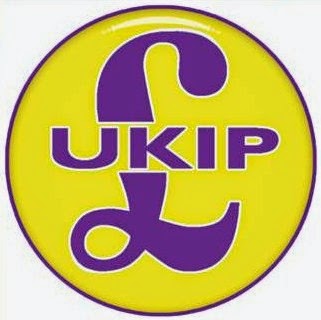 Everything had been arranged: outside the Whitgift shopping centre, a steel band was setting up, local candidate Winston McKenzie was in evidence – just to show all those rotten LibLabCons that Kippers aren’t racist – and a growing crowd awaited the arrival of Mr Thirsty from his previous pub (surely “engagement”? – Ed). What could possibly go wrong?

Well, rather a lot could go wrong: first, that growing crowd turned out to contain a significant number of Romanians, and their presence was not a coincidence. They carried home-made placards asserting “We don’t feel comfortable with your racism”, referring to Farage’s comments, later subjected to “clarification”, made during his car crash interview on LBC last Friday morning.

McKenzie was engaged in full and frank discussions with other parts of the assembled gathering over his views on same-sex couples adopting children (he had previously said that they should not be allowed to adopt, as placing children with same-sex couples was “unhealthy”). But the steel band at least was starting to play, or at least it was before its members found out whose carnival it was.

When they did figure out whose “carnival of colour” they were playing for, the band became uneasy, stopped playing, packed up and left. Then came word that Farage would not be turning up, as he had been detained by further urgent pints (surely “interviews”? – Ed). This caused McKenzie to open mouth and insert foot.

“If he hasn't turned up he is a very sensible man. It just shows how successive governments have continued to fail communities like Croydon ... Croydon, which was once the place to be, the place to shop, has now become sadly a dump ... How can you ask an international leader to turn up somewhere where he feels unsafe?” asked the Kipper who is standing for election in, er, Croydon.

So that’s another slew of adverse publicity for Mr Thirsty on the eve of the elections which his party has been expecting to win, but as I pointed out on Sunday, and earlier today, is now getting gradually worse opinion poll ratings and is seeing its share slide back to second, behind Labour. And UKIP will also be known from now on as the party that “Couldn’t organise a carnival in Croydon”.

When the going gets tough, the UKIP leadership gets thirsty. But, joking aside, if you don’t fancy these clowns gaining power, please get out and vote on Thursday.
Posted by Tim Fenton at 17:27

Of course, the MAIN problem is that it's almost impossible to satirise UKIP now, as they keep making such monumental cock-ups that even the Late Great Bill Hicks would have said "I can't compete with this!"!

UKIP are so keen to counter any talk of racism now that it seems that any Black or Asian member is pretty much ensured to be put forward as a candidate, or else to get somewhere high up in the party or on TV as a spokesman. It can't be long before they'll find someone who can can claim to be Romanian (or Roma) to put up: look - we're not racist, really...

lol the ukip campaign is getting like the episode of father ted where the more ted tries to deny he's a racist the more events conspire to suggest otherwise.

so i wouldnt be at all surprised if someone pops up on the stage of ukip's eve of poll rally decked out like father jack in full nazi regalia. any truth in the rumours the rally has been moved to nuremburg by the way?

I ask Timothy Leary, I ask the Beatles I ask Bobby Dylan but he couldn't help me either

But as The Seekers sang The Carnival Is Over and I suspect they won't get what they are after either. Thank goodness.