The legendarily foul mouthed Paul Dacre likes nothing more than the confirmation that his mighty organ can cause the Government of the day to bow before it and do its bidding. So it is that today’s screaming front page headline, “Cheat Your Way To A Passport” is alleged to have prompted a full-scale inquiry by Home Secretary Theresa May. But the premise in that headline is false. 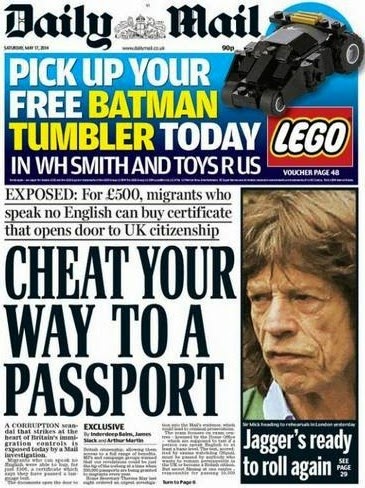 The Mail pretends to be concerned about those who might find it difficult to get jobs if they cannot speak English to what is called “B1 Intermediate” level, but there is, as Captain Blackadder might have said, only one thing wrong with this: it was bollocks. For starters, take this gem: “The documents open the door to British citizenship, allowing them access to a full range of benefits”.

Yes, it’s people talking foreign coming all those thousands of miles just so they can claim Jobseekers’ Allowance. Which no person of sound mind would do, except in the warped world of the Vagina Monologue. And what the Mail manages not to tell its readers is that, if the language qualification certificates are indeed being sold to those who cannot speak English, it is, ultimately, a con on the buyers.

We can see why this might be by considering the requirements for British Citizenship, which is the only way to get your hands on a British Passport. For starters, you must have “lived in the UK for at least the 5 years before the date of your application ... been granted indefinite leave to stay in the UK [and] not broken any immigration laws while in the UK”.

On top of that, and a residency requirement that means you can’t have spent more than 450 days outside the UK in the last five years, there is the need to pass the Life in the UK Test. This tests the applicant’s knowledge of “British traditions and customs”, and is conducted IN ENGLISH. Now, what was that about those who could not speak English having the door opened to British citizenship?

That is why, if the English speaking qualifications are being handed out – at a price, it seems – to those who cannot speak the language to the standard required, those buying the certificates are being conned. They fetch up at a Life in the UK Test and they’ll be rumbled in short order. So the Mail has unearthed a fiddle, but not one that justifies their front page headline.

That does not stop the self-justificatory Daily Mail Comment, nor the usual knee-jerk punditry, today’s prize specimens being Tory MP Mark Reckless, and Migrationwatch head Andrew Green, neither of whom did their homework before shooting off their respective mouths. That should come as no surprise, as frightening the population against those who talk foreign is all they want to do.

Nobody is going to cheat their way to a passport this way. Boring but true.
Posted by Tim Fenton at 13:18

But if it gets the public to vote for UKIP and/or the Conservatives next May, whilst relegating Labour (again) and (this time) the Lib Dems to the opposition benches then it's a winner by me and the rest of the sensible thinking public. More please, Dacre. The left-wing poison spewed out across the media by Labour, Hope Not Hate, Greens, UAF etc needs diluting even more.

Can you confirm that you approve of political parties deriving an electoral advantage through deception?