As if to underscore that the primary motivation for setting up the so-called Independent Press Standards Organisation (IPSO), named because it is anything but independent, recent Daily Mail recruit Tony Gallagher, self-styled hard man of the press and shouting champion supreme, has been demonstrating to the world just how little he and his new bosses care about the public. 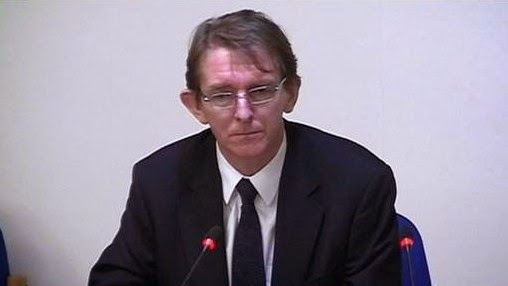 Gallagher has rejoined the Mail after being unceremoniously binned from the editor’s chair at the Maily Telegraph, where he had overseen a move downmarket which has resulted in the title’s status as a paper of record being lost for good, along with the standards of its journalism. Instead, the Tel has resorted to nudge-nudgery and channelling a number of sources out there on the right.

Recently, it shamelessly shilled for the spooks after the Snowden revelations about the machinations of the NSA and GCHQ, giving a platform to the likes of Alex Carlile to smear the deeply subversive Guardian and the journalists who have just secured the first Pulitzer Prize for public service for a title whose base is outside the USA. The Tel may make money, but as authoritative journalism, it is shot. 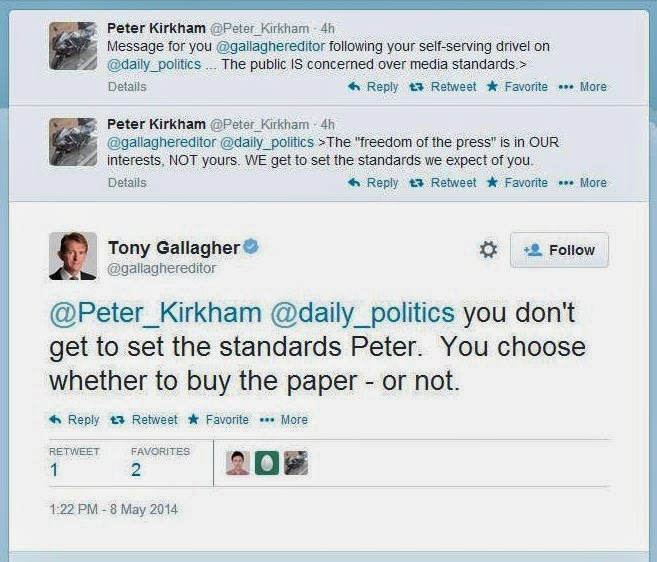 This should be borne in mind when inspecting the Twitter outburst earlier today by The Great Man after he had been prodded on the subject of press regulation: after his appearance on BBC’s Daily Politics, he told Peter Kirkham “you don’t get to set the standards Peter. You choose whether to buy the paper – or not”. Thus the uncaring arrogance of Grubstreet’s finest.

That is the reaction of someone who is hell-bent on ignoring the Leveson Inquiry and its recommendations, and would rather the cross-party Royal Charter went away. It is a sure sign that, when the legendarily foul mouthed Paul Dacre retires, or is caused to retire, the Daily Mail will continue to be as unprincipled, bullying, judgmental, dishonest, venal, spiteful, vindictive and moralistic as before. It speaks to a culture devoid of ethics, standards or indeed morals.

You think I exaggerate? Remember what Private Eye told about him: “When Tony Gallagher raised his fist to a female journalist in 2007 and threatened to ‘smear you all over that wall’ unless she wrote a story he was demanding, she was quietly paid off to the tune of £100,000 to avoid any scandal”. Thus the public face of not just the Daily Mail, but indeed the largest part of the Fourth Estate.

Gallagher doesn’t care what the little people think. And that’s not good enough.
Posted by Tim Fenton at 17:38

Gallagher is an interesting cove. Did not reply when asked about Brcqhou dwelling bosses Dave and Fred Barclay money laundering for the neo nazis via Monaco.

Very well said!! Pity Leveson was hijacked by Hacked Off & used the very lawyers that created the super injunctions. It has all backfired & now the press have got the politicians back on their side.