After loose-tongued Top Gear presenter Jeremy Clarkson was caught on camera dropping what sounded like the N-Word, his reaction was to claim that he hadn’t said it: “I did not use the n-word. Never use it. The Mirror has gone way too far this time”. But the video released by the Mirror suggested he did say it. So, overnight, the line has changed, and he has ‘fessed up. 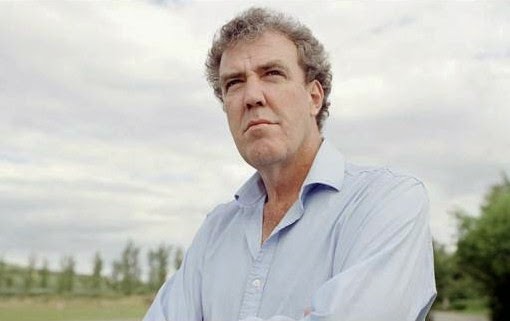 Wonder if I should just keep quiet for once?

Sadly, this came too late for the Daily Mail’s print deadline, and so the contribution of unfunny and tedious churnalist Richard Littlejohn appeared in this morning’s paper, a victim of events. In it, Dicky Windbag comes running – or perhaps that should be waddling – to the aid of Jezza, as it is claimed “Did Clarkson really use the N-word? No, says RICHARD LITTLEJOHN”.

Dick smears the Mirror, the speech analyst who checked out the tape, anyone at the BBC who leaked what appears to have been an out-take, and of course anyone who does not agree with Himself Personally Now. But here a problem enters: “At this point, it is customary to make a full disclosure: as regular readers know, Clarkson is an old friend of mine”. There’s no surprise for you.

And that doesn’t stop him moaning “His jealous enemies within the BBC are even reduced to sifting through discarded footage in the edit suite’s digital dustbin for ‘evidence’ to use against him. Pathetic. They must be really proud of themselves. Predictably, the ‘anti-racism’ professionals and the usual collection of social inadequates on Twitter want Clarkson’s head on a pikestaff”. Whatever.

In any case, Dicky Windbag was too late: “In a video statement posted online, on Thursday, [Clarkson] said that he had tried to obscure the word when reciting the ‘eeny, meeny, miny, moe’ nursery rhyme to chose between two cars, but that his efforts to do so ‘weren't quite good enough’” which means he now admits to having said it. The curse of Littlejohn strikes again.

And what Dicky Windbag will not want to hear is that the hated BBC is taking a dim view: “Jeremy Clarkson has set out the background to this regrettable episode. We have made it absolutely clear to him, the standards the BBC expects on air and off. We have left him in no doubt about how seriously we view this”. What may make it more serious is that Jezza has fallen into the same trap as Bozza.

Boris Johnson got the sack not for what he did, but for lying about it. Clarkson’s first move was to claim he hadn’t done something, only for the video to surface and demonstrate that he had. Pa Broon once admonished Damian McBride by telling him “It’s the lie that gets you”. Jeremy Clarkson was too busy ridiculing him to take any notice. And now the lie could be about to get him.

Nobody, but nobody, is irreplaceable. Clarkson may be the latest to find that out.
Posted by Tim Fenton at 13:17

He makes a shedload of money for the BBC, I doubt if he'll get the chop. However, his pseudo-
contrite mea culpa where he begged forgiveness suggests that he realises that he has pushed the BBC too far and they need each other.

Anyway, back to Littledick's column:

Did Littlejohn make a tasteless joke about the bombing of Dresden?

No, says Jeremy Clarkson, 'Richard mumbled a word that sounded a bit like Dresden but reading his column he clearly said Dresde....

Yeah, sorry Tim - don't agree. Clarkson said yesterday he didn't say it, and then went on to say that when he was mumbling the line deliberately he was horrified when it sounded like he did. He hasn't changed his story and it's not a U-turn - he still claims he didn't say it, but has apologised for even giving the impression he did. That's not the same thing as an admission he did say it at all.

Yes, he's guilty of being silly enough to consider a crap "not allowed to say this these days!" gag in the first place. But that's all - crucially he's the one who thought it sounded too close to the bone, he said he wasn't comfortable using it, he's apparently got production notes and definitely has other takes to to back him up, and he asked for it to be pulled it at the time. It wasn't an insult aimed at someone, he didn't come out with the N word full on even off air, he was aware enough of the context to know it wasn't suitable, and wasn't forced to edit it out against his will. Right decision made, by him.

That should have been the end of it were it not for the Mirror digging this up and presenting it for the sole purpose of people to get offended at. And it's counterproductive - now we have Mail readers and the like screaming "It's PC gone mad!" and becoming even more deaf and ignorant to genuine casual racism.

Plenty of people hate Clarkson - some with good reason. But FFS, let's not hang a man for realising he'd made an error in judgement and addressing it on his own merit straight away just because a tabloid with vested interests spins it like he did something he didn't years later even if it is someone that many people on the left don't like. Otherwise, we're as bad as the witch hunters at the Mail who hounded out Ross and Brand.

Have you seen this Tim?

This hasn't anything to do with Jezza and I don't want it published but I can't see a way of contacting you directly.

how does Clarkson explain this other secret . Its shows him rehearsing racist jokes http://youtu.be/HVg7Zm6wOF8