And so it came to pass that the legendarily foul mouthed Paul Dacre and his obedient hackery at the Daily Mail finally caved in and waved the white flag in the general direction of Jo Rowling, about whom they had published a flagrantly libellous article alleging that she had knowingly misrepresented her relationship with fellow churchgoers in an article on the Gingerbread website. 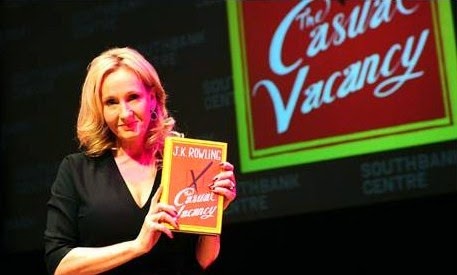 Author holds copy of book (WARNING: this image may cause offence to Daily Mail editors)

As Roy Greenslade has noted over at the deeply subversive Guardian, “The article, published on 27 September 2013, suggested she had falsely accused churchgoers of stigmatising her because she was a single mother. It was headlined ‘How JK's sob story about her single mother past surprised and confused the church members who cared for her’”. It was not the only Mail attack on her.

As I noted a year earlier, Ms Rowling’s book The Casual Vacancy was given the treatment to order by the deeply unpleasant Jan Moir, of Stephen Gately hatchet job infamy. The following day, an article titled “Hypocrisy and the ruthless PR sorcery behind J K Rowling’s invasion of her own privacy” was published, being the Vagina Monologue’s mean-spirited revenge for not giving his paper an interview.

Worse, she had given interviews to “favoured newspapers and broadcasters — namely, the Left-leaning Guardian and the BBC”. So it is not difficult to see that the Mail has been ratcheting up the unpleasantness towards the author for some time. And the reason that the paper went after her was pour encourager les autres – Ms Rowling had appeared before the Leveson Inquiry.

During her testimony before Lord Justice Leveson, she had passed adverse comment on the behaviour of the press, and specifically the tabloid part of it. Her continuing hostility towards such bad behaviour, while easily understood by the general public, meant that Dacre’s boiling anger had to be directed at her, especially as she was not the Daily Mail’s kind of person.

Why so? The Vagina Monologue does not approve of single parents, all the moreso if they openly disapprove of his gofers’ methods. And Ms Rowling has also signed the Hacked Off “Leveson Declaration”. So, despite admitting libel back in January, the Mail dragged its feet as long as it could, even disputing her right to make a statement about the case in court (they lost that one, too).

So today there has been a “clarification” on Page 2. But that’s prominent, isn’t it? You jest. Sun staff will tell you there’s a good reason Page 3 is on Page 3: the eye wanders to the right-hand side of a double page spread, and most readers will miss the item, especially as it’s at the foot of the page. This is what is meant by “burying corrections”. Dacre doesn’t want to world to know that he lost this one.

Jo Rowling had the determination and money to take on the bully. Well done her.
Posted by Tim Fenton at 17:28

It was to be hoped that Dacre would understand the meaning of "mendacious smears" after his misguided attack on Hugh Grant's testimony at Leveson.

It looks as though he has learnt too well (as if he didn't know already).

Was it Danny Baker who said that never mind a court case, she should just buy the paper and fire the f*cking lot of them.

It certainly was Danny Baker.

Correct, close down the DM, close down the Telegraph and the Times and the Sun. There should only be the Mirror, Guardian and Independent running our print media and of course the wonderful BBC to be the broadcasting arm. We're getting there comrades!