If anyone was still in any doubt as to the detachment from reality of some in the Westminster bubble, this week’s admissions from Dominic Cummings, former head of Michael “Oiky” Gove’s retinue of polecats and employed using taxpayers’ money as one of Gove’s SpAds, will put them straight. A more arrogant, delusional, intolerant, misinformed and frankly batshit outburst would be hard to find. 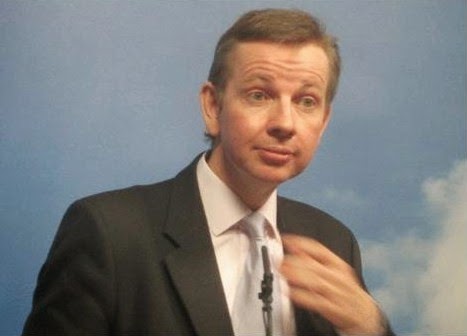 Yes, "Oiky", he was your chief polecat

But the clearest admission comes at the very beginning, as Cummings titles his outburst “Babble in the Bubble: UFSM, Clegg’s lies, and the general dysfunction of the British state”. Those who have been on the receiving end of abuse from the @toryeducation Twitter feed will recognise the word “babble” (you can see examples of it HERE, HERE, HERE, HERE and HERE).

Cummings, of course, claimed not to be involved with @toryeducation, but this is just another example that demonstrates his flagrant dishonesty, and shows that he is the last person to call out anyone else for lying. But let’s look at that acronym he pitches there: UFSM means Universal Free School Meals, and Cummings shows his appalling arrogance by calling this a “gimmick”.

Think about that for a moment: a move that would ensure pupils get a balanced and nutritious meal at lunchtime, and gives them an opportunity to interact and build their social skills, is dismissed as a “gimmick”, so obsessed is Cummings with his own narrow view. Such is his obsession that anything he does not think of first is a “gimmick”, or, as @toryeducation watchers will know, worse.

It gets worse: Cummings says that Nick Clegg “claims to the media of a DfE ‘underspend’ were fictitious since we actually had an overspend of hundreds of millions”, without wondering why that might be. The Free Schools programme has already gone £1 billion over budget. As Private Eye might have put it, “I wonder if the two are in any way connected? I think we should be told”.

Then there are the leaks: “I want people in No10 to realise that every time between now and next May that they interfere in the DfE with some stupid gimmick, the story might go badly wrong because someone will leak something”. How can Cummings be so sure of this? Helpfully, he also tells “In March 2014 I revealed some of this to WATO [World At One]”. In other words, he is the one doing the leaking.

So when he says “Some public spirited person leaked a load of emails to WATO” and “Another public spirited person has tipped off WATO”, Cummings is talking about himself. And he is threatening Cameron – that would be the Prime Minister – with more, unless his bestest pal “Oiky” is left alone to do as he pleases. Dave has no option here: he must sack Gove, and trace and discipline Cummings’ sources.

To vacillate will only make matters worse. The cancer must be cut out. End of story.
Posted by Tim Fenton at 10:12

"Dave has no option here: he must sack Gove, and trace and discipline Cummings’ sources."

Are you sure that Rupe would allow that? After all after the NewsCorp BSkyB debacle Hunt, another of the sock puppets, was promoted beyond his ken instead of being kicked out as surely he should have been?

When will the Tories deal with the fact that they have been nursing a narcissistic egotist in Education?

And that he's been employing his psychopathic alter ego as a spad!