“HS2 is a disastrous white elephant” declares Green Party Transport Spokesperson Rupert Read today, selling the pass before he even gets past the title: something that hasn’t even seen start of construction cannot yet be so judged. The standard of his argument does not improve: at no point does he even begin to address the problem which has led to HS2 – network capacity. 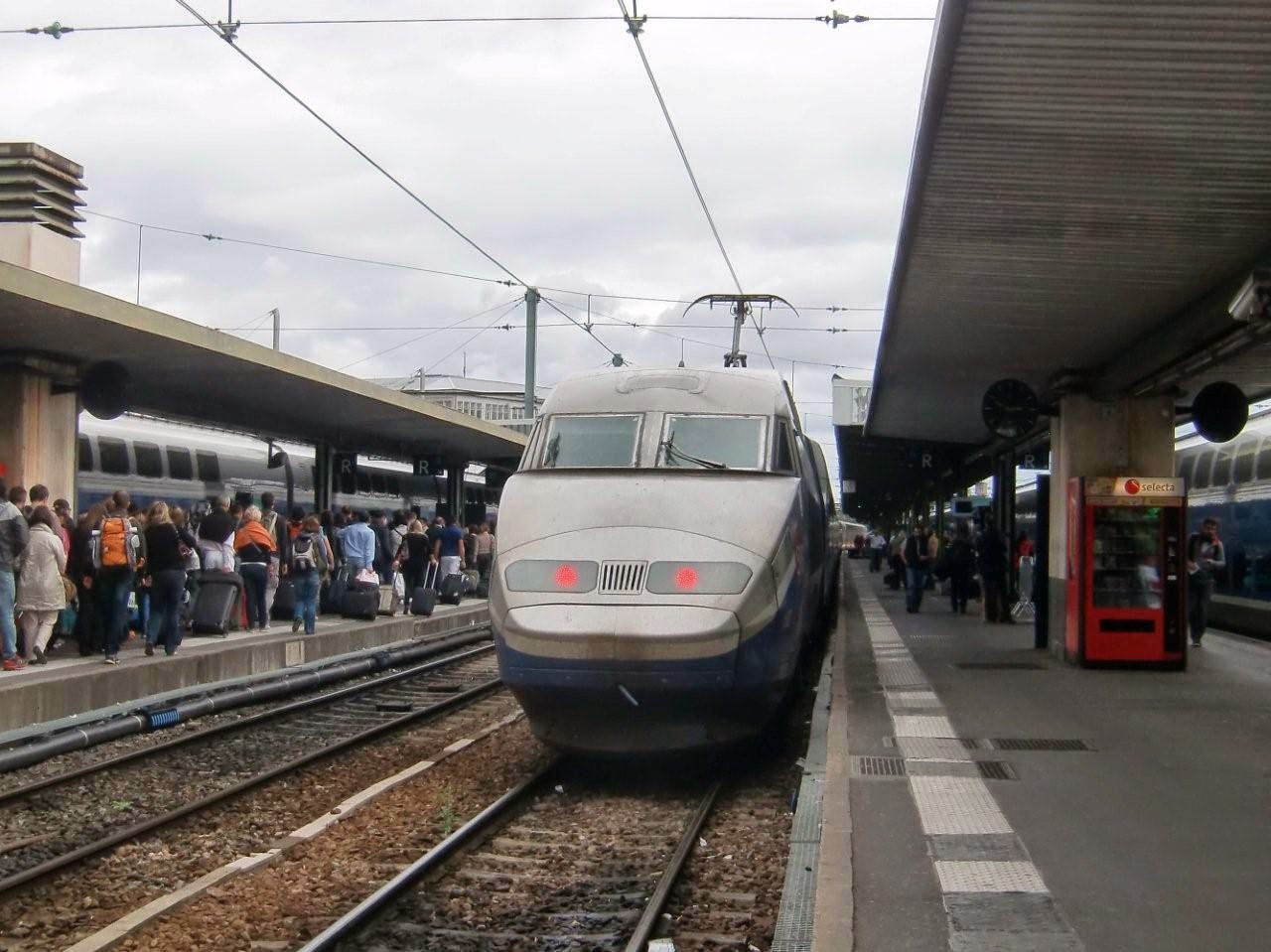 High Speed Rail. But not in the UK

Moreover, Read relies on the fraudulently inflated estimates of the IEA for his figures, which must be a first: Greens relying on right-wingers who couldn’t give a flying foxtrot about, well, Greens. Zelo Street has already dealt with Richard Wellings’ deeply flawed analysis (see HERE and HERE). The estimated cost, I would remind Read, is just under £43 billion, including a 50% contingency.

Read tells that HS2 will be “a train service for the rich”, thus also chiming the propaganda of the so-called Taxpayers’ Alliance, another right-leaning Astroturf lobby group who don’t give a fig about Greens. And look: “Phase 1 taken alone is estimated to return only £1.40 on every £1, whereas a 2012 DfT report suggests expansion of the West Coast main line would return £6.06”.

Expansion how, exactly? And where is the reference to this mythical report? And then – oh dear: “HS2 is intended as purely a passenger service, it would not carry freight. Any benefits accrued from getting vehicles off the road, including the reduction of negative externalities from carbon emissions, are thus seriously diminished”. CAPACITY IS FREED UP ON EXISTING LINES FOR FREIGHT.

So it can be seen that this is not a serious analysis, as is confirmed by “commuter trains leaving Euston for the North are currently mostly empty”. Commuter trains, those run by London Midland, leave Euston at peak times with STANDING ROOM ONLY, and precious little of that. Try again: “It is only the expected volume of commuters to London that will make the service economically viable”. 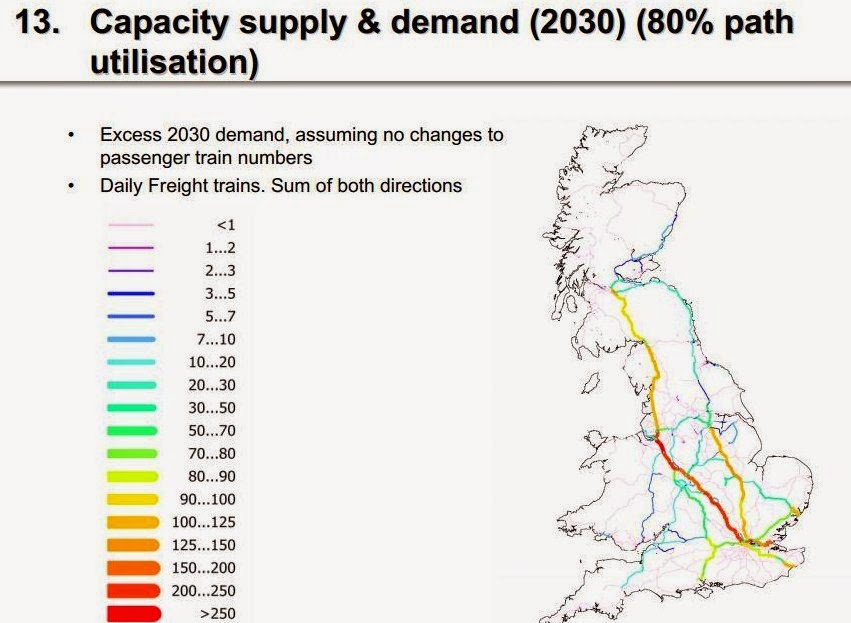 Commuter services will continue to be run, as now, on existing lines. HS2 will take longer distance services off those lines. Once again – fortunately I never tire of wheeling this out – I refer Read to the Rail Freight Group prediction for 2030, showing excess of demand over capacity for freight paths. But let’s cut to the main event, and ask how Read and his fellow Greens plan to address the issue.

“The simple truth is that we will not improve the North with an infrastructure project focused on London, but by improving connectivity within the North of England itself”. HAVEN’T YOU HEARD OF THE NORTHERN HUB PROJECT? “Completion of the East-West link ... linking Oxford and Cambridge”. ALREADY BEING PLANNED. How can a party be taken seriously when its members can’t bother researching first?

I thought the right-wingers were bad enough. The Green Party is matching them.
Posted by Tim Fenton at 17:27

This is mostly atrocious rhetorical drivel. Sorry; you'd have to actually be saying something Way better than this to eke a point by point reply out of me. This isn't worth replying to.

I've never seen a Green statement that's pro anything (unless you count "the opposite of whatever s/he said" as pro).

Thank you for replying, Rupert. Sadly, abuse and projection will get you nowhere. And you are right, I shouldn't have bothered - you really aren't worth replying to.

If that is the best the Greens can manage, then they are going nowhere.

You didn't bother researching and got caught out. Deal with it.

Dr Rupert is notoriously thin-skinned. Also regularly very annoyed that the rest of humanity fails to agree with his lofty pronouncements.

Poor article on many levels, and for many reasons:

There have been many reports and much data to show that HS2 is an awful waste of money. Trusting HS2 Ltd and rail industry data is akin to trusting that all the promises in the Conservative manifesto will materialise if they are voted in. Of course the HS2 Ltd/rail industry information is going to support HS2, they want their shiny new train and their money! Hilariously though, even the DfT's own report can't be window-dressed to make the project look good - the Transport Secretary Patrick McLoughlin thought it was so embarrassing he blocked its publication! State censorship is alive and well in the UK.

Anyway, whatever the data says is moot. Trains are Victorian era technology and whatever anyone says in support of HS2, the likelihood is that by 2026 trains will be a relic of a bygone era. £50+ billion could and should be invested in modern technology, not this smokey old train.

When you called an electric train "smoky", that is when you sold the pass.

And there has been no censorship of reports into HS2. But by all means cite one of those "many reports" that back up your stance.

Just because a train runs on electric doesn't make it green - quite the opposite actually. Fuel -> Electricity -> Kinetic energy means energy is wasted more than simply Diesel -> Kinetic energy. I was merely referring to it's inefficiency.

You missed out the additional weight of the diesel powerplant and the transmission losses, plus of course the lesser reliability of diesel trains.

So I do indeed win.

Complaining that something is poorly researched and illustrating this by referring to a "mythical" report invites a moment's effort to show the researchfail, as usual, is closer to home.
Google West Coast Main Line + 6.06 and hey presto you find national media stories about this, the well known WS Atkins report.
http://www.theguardian.com/uk/2012/jan/14/hs2-value-rail-option-report
The rest of this ham-fisted attack is of a similarly feeble standard but worth linking to the actual data on crowding in and out of Euston on long distance & commuter services in both peak and off-peak over the last few years which rather undermines the lurid picture painted here.
https://www.gov.uk/government/uploads/system/uploads/attachment_data/file/266352/F0010822_table.pdf

Ah, another reference to the 51M report, which assumed an unworkable timetable would, er, work.

"National media stories" also covers the attacks from the IEA, TPA, CPS and ASI. That does not make them any more valid.

Wrong again. If you managed to read all the way through the first paragraph of the Guardian piece I linked to, you would find it describes "a report commissioned by the government and quietly published the day the project's go-ahead was announced. The report, by engineering firm Atkins, estimates the project offers a far poorer return on the taxpayers' investment than an alternative scheme aimed at improving existing lines and services."
This is the report you claim is mythical.
I note you don't even attempt to rebut the figures on Euston (absence of) overcrowding. But why let facts get in the way of prejudice?

It was still the 51M report. And 12 car trains for Inter-City services are not a practicable proposition.

And London Midland's services - those would be the commuter ones, remember - are standing room only out of Euston at peak times.

These, BTW, are comments, not comprehensive rebuttals. And an overbearing and sneering attitude will not advance your cause any further.

"It" is the WS Atkins report, commissioned by the Govt. Not, as you say, a myth.

The data I linked to shows loading substantially below train capacity in peak arrival and departure hours on long distance and suburban services. Did you not bother to look at it?

Perhaps you would like to provide a source for your claim.

Ah, we're talking Atkins RP2. And no, the report is not a myth - but the oft-repeated claims made for it are, which is what I was getting at.

The 51M crowd used RP2 as the basis for their attack on HS2.

The problems with RP2 are well-known: no freight provision, the idea that a grade separated junction can be inserted into the WCML somewhere near the current Ledburn Junction without significant disruption, and providing extra capacity where it is not needed.

Running more trains outside the peaks is how RP2 gets all that extra capacity - but how they get filled would be another matter. Hence my not taking the 6.06 figure seriously.

On top of that, there would be an over-optimistic timetable, which would require heroic levels of reliability. The reason that lines are generally not diagrammed for more than around 80% of theoretical maximum capacity is not just a finger-in-the-air thing.

Even the so-called Taxpayers' Alliance has stopped citing RP2 as a catch-all solution.

And, while you're at it, tell me how something gets "quietly published". Are there degrees of publishing loudness? No, but there is subjectivity, even at the Guardian.

whilst the Greens have suddenly become interested in what people from Crewe have to say could I just ask why they have so quiet over the scandalous waste of money on cycling projects here.

Twelve years ago a huge amount was budgeted for the cycle path along the A534 through Crewe's worst congestion and after the work was done you'd be hard pressed to find any benefits - and what there is came out of a paint tin. And to add insult to injury, that road now seems to have been dropped from the regional cycle routes and cyclists who wish to ride from Nantwich to Sandbach (and who apparently have no idea of local geography) are advised to use the A530 to the west of Crewe and then come through the town centre!!

Not a word of query from the Greens of why these schemes cost so much (or, more likely, where the money actually went) - if it's bikes it must be good.