Following yesterday’s front page splash by Rupe’s downmarket troops at the Super Soaraway Currant Bun, which was neither exclusive, nor revealing a secret, the Scary Muslims Food Frightener has today migrated to the front page of the Daily Mail, where the obedient hackery of the legendarily foul mouthed Paul Dacre tells that “Millions Are Eating Halal Food Without Knowing It”. 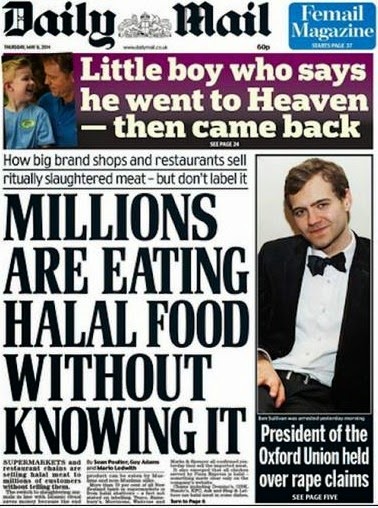 The routinely scary sub-headings are all too predictable: “Supermarkets and restaurants sell halal to customers to save money ... They do it so the meat can be eaten by Muslims and non-Muslims ... More than 70% of all New Zealand lamb in supermarkets is halal ... Tesco, Sainsbury's, Morrisons, Waitrose and M&S all sell it”. As Sir Sean nearly said, I think we got the point.

Then comes “It also emerged that all chicken served by Pizza Express is halal – something made clear only on the company's website”. No, it was known about two years ago – and the information is there for anyone who is concerned. But why should there be such interest in animal welfare? What goes on inside abattoirs has in the past been something one doesn’t talk about.

And, while we’re at it, provided the animal is stunned – 90% plus of halal-slaughtered animals are pre-stunned – why the fuss? As the British Retail Consortium rep told the Mail, “As the overwhelming majority of meat sold in UK supermarkets is own brand and from animals that have been stunned prior to slaughter we do not see the requirement to separately label meat based on the method of slaughter”. Quite so.

Why the fuss is explained later on, as readers are told of “A stealthy takeover of Britain's supermarket shelves”, before being introduced to a Halal butcher in a suburb of Birmingham, where animals are not pre-stunned before slaughter. The clear suggestion is that this is what is being served up by Pizza Express, while the reality is that it is not (see RSPCA factsheet on this HERE). And why Halal?

Why so? Those believing, for whatever reason, that this is all about exposing an attempt to force ritually killed food on those who don’t want it – and there is a magnificently batshit example by Brendan O’Neill at the bear pit that is Telegraph blogs right now – need subject the narrative to just one test. Take out “Halal”, and instead insert “Kosher”, which also involves ritual slaughter.

And remove any reference to “Muslim”, in favour of “Jewish”. How would “A stealthy takeover of Britain’s supermarket shelves” play if the target was Jewish? Not even the Daily Mail would go anywhere near it. And that, folks, is why the title of this post includes the word “Islamophobia”. That was the Sun’s game yesterday. It is the Daily Mail’s game today. It is frightening the readers dressed up as animal welfare.

It is the demonising of one religious group for profit. And that’s not good enough.
Posted by Tim Fenton at 13:15

It'll be interesting to see what happens on the kosher front if that whiny metropolitan atheistic non-Muslim gets into Downing Street.

This reminds me of a campaign that the French National Front ran a couple of years back. It claimed that children were forced to eat Halal school food...