The Fourth Estate loves to talk about the Leveson Inquiry – and most of the talk remains hostile – but the detail of what their own Great and Good said is gradually being forgotten, perhaps conveniently. Editors and owners gave evidence on oath, so if any of them misled the Inquiry, that would be serious. Well, the impression is given that one of them most certainly did mislead it. 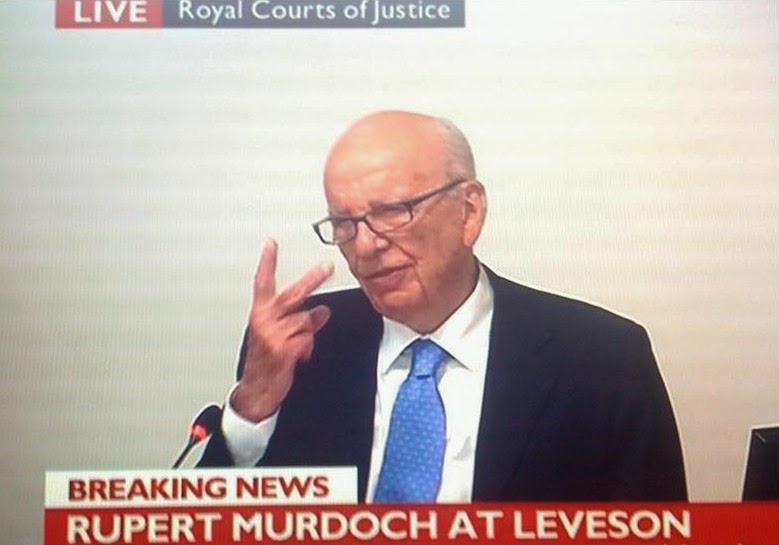 That's what I think of youse bladdy Inquiry, Pommie bastards!

As the deeply subversive Guardian noted at the time, Rupert Murdoch regaled the Leveson Inquiry with dire predictions. Print media, he asserted, was a sickly child, and what he characterised as “over-regulation” could kill it off. This was a successful career press man speaking; all press watchers sat up and took notice. So let us revisit events two years ago, and see what Rupe said – under oath.

“Every newspaper has had a very good run... It's coming to an end as a result of these disruptive technologies ... I think we will have both [internet and print news] for quite a while, certainly ten years, some people say five. I'd be more inclined to say 20, but 20 means very small circulations ... I think you have a danger of regulating, putting regulations in place which will mean there will be no press in 10 years to regulate”. Then, to be on the safe side, he kicked the BBC.

So Rupert Murdoch told Leveson that printed newspapers would be around for “certainly” ten years. Well, Rupe’s a hard-nosed business type, isn’t he? So he will look to invest on the basis of certainty, not a world 20 years in the future where there would be “very small circulations”.

Coincidentally, Rupe’s print operation has recently left its home in the east London district of Wapping, and relocated to what has been dubbed the Baby Shard. So we know that there is some future in printed newspapers. The question is, how long has Murdoch judged that future to be? What is his call on the length of time that his titles will “certainly” be around?

And that figure, press watchers, is not a mere ten years: Rupe’s print empire has signed a THIRTY YEAR LEASE on the Baby Shard. Worse for the Dirty Digger’s reputation, this appears not to have been some more recent change of mind, as a look at the timeline shows. He gave his Leveson testimony – on oath – in April 2012. The decision to leave Wapping was taken the following month.

News UK must have had some idea where it was going at that time, although the announcement of the Baby Shard move did not come until July 2013. What we appear to have here is Murdoch very deliberately misleading the Leveson Inquiry: saying print would be around for “certainly” ten years, then planning on a period three times as long.

What is worse is that, thus far, nobody has called him out on it.
Posted by Tim Fenton at 10:48

The fact that he (or his company) have signed a long term lease may well be a business porposition not entirely related to a "press" operation as a long term lease could well be a valuable commodity for resale in the short term (if the bubble doesn't burst!).

What is scary is that he may be planning on staying around for thirty years!

Looking at the state of him I don't think HE will manage another 5 years, never mind 30!

Omerta precludes you revealing any alleged deal you may have done with him, you devil you?