The dubiously talented array of non-job holders at the so-called Taxpayers’ Alliance (TPA) has not featured on Zelo Street for a while, so today they get not only a mention, but also an invitation, to show that they are really concerned about taxpayers getting value for money and bearing down on the most blatant examples of Government waste. One might expect them to be hot on the case. 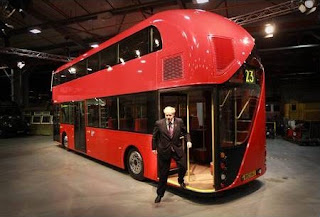 But such expectations would be sorely misplaced, because the TPA is first and foremost not a popular movement, but an Astroturf lobby group and a firmly ideological pillar of the Conservative Movement. So their focus right now is tomorrow’s Conservative Renewal Conference, held under the aegis of Windsor Conservatives and supported by the TPA and the Freedom Association.

This no doubt explains their absence from the debate surrounding the decision by Transport for London (TfL) to order 600 production examples of the New Bus For London (NB4L), aka the BozzaMaster, at a cost of at least £160 million upfront, plus an additional £40 million a year – every year the vehicles are in service – for them to have conductors, who will not check fares.

That £160 million figure could rise significantly, not least because Wrightbus of Ballymena is the sole supplier of the vehicles, and they contain a significant amount of one-off equipment, from the rear platform to the custom glass and body panels to the power unit. And uniquely, TfL is having to order the buses and impose them on operators – those operators don’t want them.

This means contracts for routes operated by the NB4L will have to be specially drawn up, the conductors – another “feature” the operators don’t want – will be employed by TfL, there will be no future outside London for the buses because nowhere else wants them, and their operational life will be just 14 years (many Routemasters put in more than 35 years’ service).

The extra costs over and above what would have been incurred by allowing operators to order conventional double deckers will mean either higher fares – and there is already slated to be less financial support for buses in London in future, so these will already be rising – or less service elsewhere on the network. Boris Johnson’s vanity bus will be a bad deal all round for Londoners.

So where is the TPA? Well, yesterday, when the TfL announcement was made, their “Grassroots Coordinator” Andrew Allison was scanning job adverts to find non-jobs (I know, he would have been best advised starting with his own) and the rest of his colleagues were conspicuous by their absence from the airwaves on the subject of the NB4L. When London’s taxpayers needed their advocacy, they went AWOL.

Because the TPA is about ideology, not taxpayers. And that’s not good enough.
Posted by Tim Fenton at 10:35