Express – Lead Stories For Nothing

While some newspapers still indulge in proper investigative journalism, for the poor folk at the Desmond stable of titles, this is at best no more than a fond memory. Successive rounds of staff and budget cuts have meant that even lead stories have to be brought in for no more than the cost of a few phone calls to those on the approved list of talking heads. And today has brought a classic of this genre. 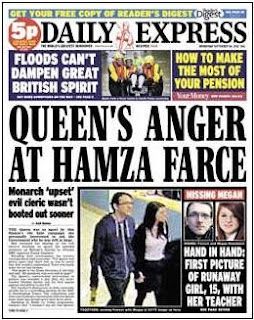 “Queen’s Anger At Hamza Farce” screams the headline in today’s Express, thus ticking a number of key boxes: promotion of royalty, the idea that law enforcement authorities – implicitly because of the hated EU – are somehow unable to do what the paper asserts they should, whipping up anger by using pantomime terrorist villains, and of course there are Muslims out there.

But this is not new news: the story came from BBC Radio 4 yesterday, when security man Frank Gardner inadvisedly let slip that Brenda had confided in him her dismay at the apparent inability of the authorities to detain outspoken cleric Abu Hamza. One should not allow such conversations to go any further, but Frank did, and the Beeb spent the rest of the day in grovelling apology mode.

That clearly hasn’t bothered the Express, where Anil Dawar didn’t even have to lift the phone to get his quotes: that from Tory MP Patrick Mercer was available to anyone with a subscription to PoliticsHome. The quote from Labour’s Keith Vaz comes from the BBC. The rest of the Express lead could also be pieced together from similar sources or BBC Audio.

And there you have it: a front page splash that did not cost the Express anything to produce, over and above paying the hack who cobbled it together, and other fixed costs, such as providing the office space and IT equipment. One has to wonder if the unfortunates who labour in the service of Dirty Des have to pay for the product of the coffee machines, as well as produce this mind-numbing drivel.

But that won’t trouble Richard Desmond, as long as his empire is turning a profit. And there’s better cost control when you cut out those niggly extras like proper investigative journalism and replace them with day-old cut and pasted stuff from other sources, meaning that the hacks don’t need to leave the office, don’t have any extra travel expenses, and can be made more productive as a result.

Which means just one thing: another Benchmark Of Excellence.
Posted by Tim Fenton at 10:58