Nowhere in the Fourth Estate is the teaching profession more regularly and routinely denigrated than at the empire of the legendarily foul mouthed Paul Dacre, and this week has seen the Daily Mail frame an incident whose participants had no connection to the UK education system to continue that denigration. Moreover, those participants do not live and work in the UK. 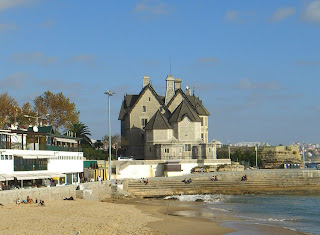 The Lisbon Coast: this is Cascais

The facts are, more or less, that a two year old girl was found playing on her own near a busy road in the Portuguese town of Carcavelos, which is just west of the tech and commercial centre of Oeiras on the Lisbon coast. Many Brits may not recognise the name unless they’re keen surfers, but if they’ve travelled out to Cascais or Estoril on the coast railway, they will have passed through.

Police were called and found the girl’s parents, apparently in an advanced state of alcoholic derangement, in a nearby bar. The girl has been, for the time being, taken into care. The Mail – its story echoed by the Super Soaraway Currant Bun, another source of impeccably anti-teacher views – concluded that the couple were on holiday, despite this assertion not being confirmed at the time.

The body of the story reveals this – reports differed, one saying the couple were on holiday, with another asserting that they lived locally – but the first mention, near the top of the piece, is unequivocal. If in doubt, smear the teaching profession. Only when the story was revisited the next day was it confirmed that the couple were living and working in the area.

Strangely, the Mail managed to miss the part of the area’s Wikipedia entry that tells of several international schools being located in Carcavelos, but saw the part about the local wine, which in the retelling was held to be both strong, and what the couple were drinking, although the chances are it was whatever the bar served from a polythene container behind the counter (says a regular visitor to Lisbon).

So the only interest for anyone in the UK is that a British couple’s little girl wandered off from her parents and was temporarily taken into care while the authorities sorted the matter out. Is that serious news? No it isn’t, but partly because of it happening in Portugal there is the ever present Maddie Factor, and because the parents are teachers there is a chance to put the boot in on the profession.

That’ll be agenda driven hackery at its worst. No change there, then.
Posted by Tim Fenton at 13:39

British couple get paralytic and lose their toddler isn't a story?
Of course it bloody well is.
It would be a story whatever their profession and whatever country they were in.

It's news when the Cameron's do it.