As I pointed out yesterday, the two established channels for disgruntled Police sources to get their views heard are the Sun and the Daily Mail. When Andrew Mitchell had his singularly unfortunate outburst at officers guarding the gates at the end of Downing Street, the first port of call was the Super Soaraway Currant Bun. The response of the legendarily foul mouthed Paul Dacre can only be imagined. 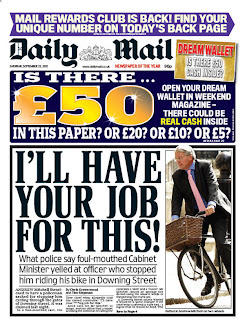 Thus it was that the Mail tapped their own contacts at the Met and brought forth a front page of righteous anger this morning, as Mitchell now stands additionally accused of telling a WPC “I’ll Have Your Job For This”, which, it is later helpfully explained, was spiced up with an expletive in the original. Mitchell’s position is looking less certain by the day. And that’s before all the other revelations.

One of those revelations, about Mitchell’s behaviour towards Lucy Kinder during a volunteers’ trip to Africa, was published by the Telegraph, which means he’s in trouble. It details his “incredibly aggressive” behaviour, with Ms Kinder being subjected to threats of physical violence by those around him. Mitchell has also succeeded in ticking off the Metropolitan Police Federation.

And that means he’s annoyed so many officers that word has got back to the body that is effectively the cops’ trade union, whose chairman John Tully has accused Young Dave of “hollow words” after Cameron went to Manchester to pay tribute to the two officers who were shot dead earlier in the week. Tully’s attack was also fuelled by anger in the ranks over Police pay and pensions.

I know, strange, isn’t it, after Margaret Thatcher went out of her way to see them right and get them on side, that a Conservative Prime Minister seems so hell-bent on ticking them off? But, as Clive James might have said, I digress. Back to the unfortunate Andrew Mitchell, who has also been made the subject of an attack by appalling Glenda Amanda Platell, which might actually help his cause.

What won’t help his cause is the pundits queuing up at the Telegraph to put the boot in, foremost of which is Norman Tebbit, who knows a bit about that kind of thing. Norm says, with a subtlety not always evident during his ministerial days, “Andrew Mitchell seems to be under more pressure than he can handle”, which, in case you didn’t get it, means he isn’t up to the job.

Worse comes from Thomas Pascoe, who reveals that at Lazards, “Lord Mandelson was a welcome hire in comparison” to Mitchell (ouch). Benedict Brogan makes the obvious point that the affair does the wider Tory Party no good at all. And Bernard Hogan-Howe, head man at the Met, has previously gone on record on the subject of “opportunities” to arrest those who swear at his officers.

Cameron should have sacked Mitchell yesterday. Now they’re both in the mire.
Posted by Tim Fenton at 17:38

It does take a very special sort of political talent to piss off the police, the armed forces, the civil service and the public, all at the same time and within no more than two and a half years.