Politicians are adept at creatively interpreting opinion poll results to favour their own party or position, so it should surprise no-one that the assembled rabble at the Guido Fawkes blog has joined this less than august group. The shameless spin has been applied to a poll commissioned by lobby group Open Road from pollsters Populus, which sought opinions on the public’s trust in media outlets. 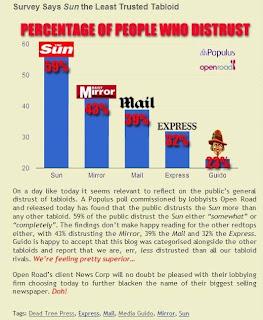 Looking at the chart on the Fawkes blog, one might at first think that they really do have something to crow about, emerging “less distrusted” than the Super Soaraway Currant Bun, Mirror, Mail and Express. But that thought would be misplaced: not only have all the quality papers – Times, Independent, Telegraph and Guardian – been omitted, so have all broadcast news outlets as well.

And it’s interesting to see the Fawkes blog talking of “our tabloid rivals”, so some refreshing candour from the perpetually thirsty Paul Staines and his tame gofer, the odious flannelled fool Henry Cole, along with their errand boy Alex Wickham, for once. So now you know: The Great Guido does not aspire to the heights of trust reached by the qualities or the broadcasters. 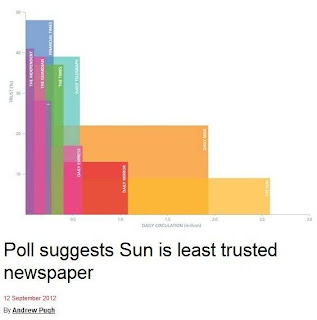 Moreover, what is most interesting is what the Fawkes folks didn’t put in that post. The survey also asked its sample of just over 2,000 respondents not just about distrust, but about trust: in other words, those who saw the various sources of information in a positive light, rather than the negative one reported by the Fawkes blog. And there’s a good reason they didn’t give their readers the results. 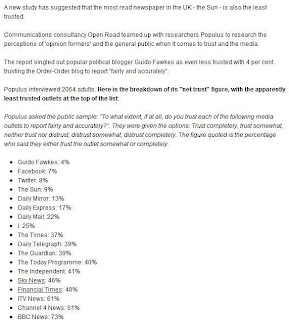 Because, although the tabloids rated as low as 9% (yes, Rupe, that would be the Sun once again), the Fawkes blog was trusted by just 4% of respondents. And those results include the qualities, which rated between 37% and 41%, and the broadcasters, their trust ratings ranging from just 46% for Sky News (“first for breaking wind”) to a serious 73% for BBC News.

So not only has the Guido Fawkes blog admitted that it is a tabloid standard operation, but it also rates rock bottom of the trust league, being less trusted than all the tabloids – and also less trusted than Facebook and Twitter to report “fairly and accurately”. So far from being a ringing endorsement of Staines and his rabble, the Populus poll is instead a damning indictment of their spin and dishonesty.

The Fawkes blog has been well and truly rumbled. Another fine mess, once again.
Posted by Tim Fenton at 10:39