A new comedy genre is sweeping the US Twittersphere, garnering over 1.4 million followers to hang on the words of the master of the hairspray and combover combination. I give you Donald J Trump, so, er, take him away. Please. 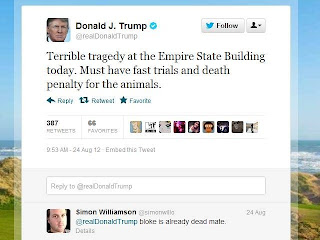 Tragedy at the Empire State Building! So Donald wants someone to go the chair. Er, the only shooters alive right now are the NYPD. 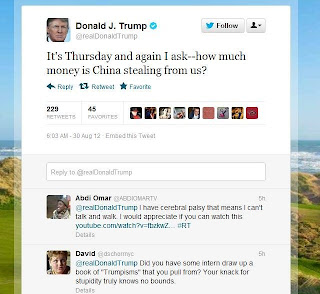 China is stealing from the US? Er, no Don, it’s buying lots of your debt. Bugger all point getting radged about someone who’s keeping you afloat. 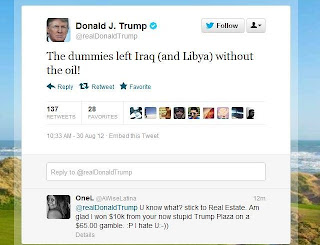 They left Iraq and Libya without the oil? What was that about stealing? 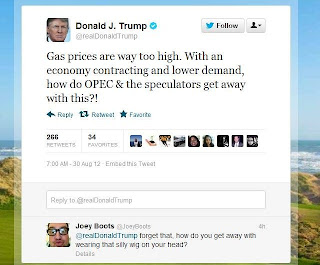 How do they get away with high oil prices? You’re a businessman and you haven’t got a handle on that thing called economics? 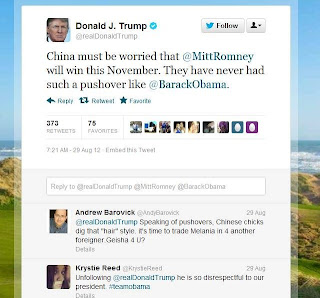 What would Mitt Romney do differently with China? You stupid enough to think he would invade them? You haven’t heard of armies that fire back? 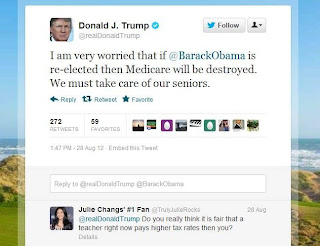 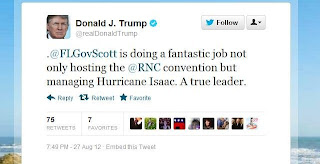 The Florida Governor is “managing” hurricane Isaac? How’s he do that, then? Does he wave a magic wand at it and shoo it away? 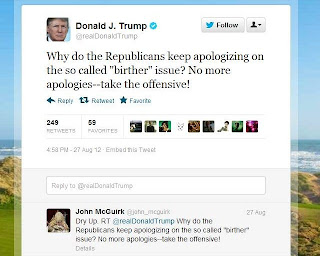 Take the “offensive” (you certainly are) on the birther issue? What did happen to all that “evidence” you were going to show the world? 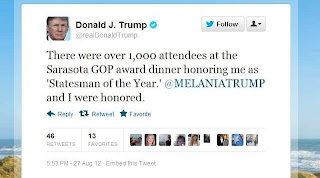 A thousand people honoured you as “Statesman of the year”? That just goes to show that in a country of 300 million, you can find 1,000 gullible and stupid ones. 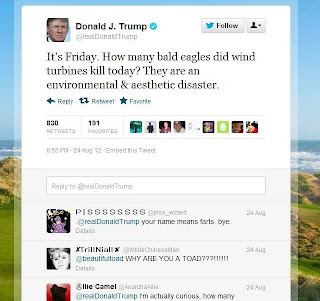 Yeah, how many bald eagles did wind turbines kill today? You think they’re as stupid as those 1,000 who paid good money to honour you? Whatever.


Don, as a serious source of business and political intelligence, you’re fired. But as a new source of comedy gold – you’ll do very nicely. On Twitter idiocy alone, you’re hired. Can’t promise you’ll get paid, mind.
Posted by Tim Fenton at 11:26

Just think how when oor kingfish was kissing the last Trump's arse to let him vandalise the Aberdeenshire coast with a golf course and then it all went sour. And all over off shore windmills.

^ I did hear that he spoke so poorly of the locals, so often, because the wind power development wasn't shifted far enough out of sight for his liking, that a young man claiming to be his son was calling about the city to apologise on his behalf in a very embarrassed manner.

Presumably there are advantages to being in that position, but... poor sod.