Yesterday, washed-up hack Dennis Rice, who still pretends anonymity as Tabloid Troll, briefly paused his barrage of name calling and smears against this blog. This event was, due no doubt to an entirely coincident oversight, not mentioned to me, nor to any of the organisations to which Rice has been trying to push his hate campaign to label me a “vile internet troll”. 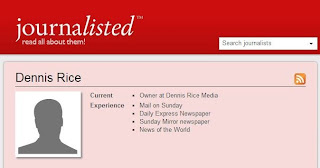 Anonymous for how much longer?

All this is in pursuit of Rice’s continuing effort to have me withdraw a post where his fellow hack Nigel Pauley was called out in kind after he and Rice made a number of highly personal comments about a photo that Rice asserted was of me. Rice wrongly and very loudly claimed that I was mocking someone because of their medical condition. I was not. The post will not be so much as amended.

Rice now appears to show some regret for his actions. But there is no regret signalled to MacMillan Cancer, the Sun, the Daily Star, Stand Up To Cancer, F*** Cancer, or to the fourteen other Twitter accounts to which he posted his assertion that I was a “sick” blogger “mocking” cancer sufferers (note that Rice did not enquire as to my well being before doing his own mocking). 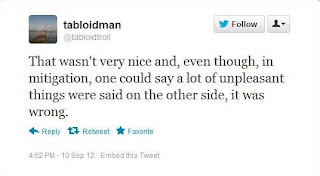 There is no regret at the constant efforts to extract information by asserting that I live in “a squalid flat”, or a “****hole”, designed to drive denial and revelation (another failure), or of the stream of abuse: “sack of shit ... decrepit imbecile ... barely literate ... despicable old goat ... unmarried (these two might not fit well together, Den) ... illiterate ... scumbag ... ghastly evil ... freak ... baldy”.

Moreover, there is no regret shown to whoever lives at the address which Rice published and then claimed to be “only a business address” (it isn’t – it’s a private house). There is no regret to the Tim Fenton who is connected via marriage to the former Yugoslavia, and who has contributed to research on the troubles there, whoseFacebook page was trawled and asserted to be me.

So Rice should not be surprised to learn that I am not even slightly impressed by his apparent volte face. He seems to think that he can embark on a sustained campaign of malicious defamation and then clear it all from his account by issuing a very partial and utterly insincere apology. It won’t wash, Dennis. Your behaviour has been utterly beyond the pale, and there is not going to be any way back from that.

Dennis Rice can take his worthless apology and shove it.
Posted by Tim Fenton at 17:28

I've been amused by the TT saga for ages, and I sympathise with you a lot. However, as a non-tweeter there seems to me to be a number of gaps in the unfolding story. Who is or isn't a cancer sufferer? What comment was taken to mean that you had mocked cancer? When and how was the attempt made to associate you with a paedophile?

Please can you do a Tim Ireland and do a full recap of all the salient occurrences throughout this?

I've added some links, including two to Richard Bartholomew's excellent analysis of the saga, and that by West Of Westminster. Hopefully that will give all the relevant background for you.