Some out there on the right are getting very excited right now about a body called Derbyshire Unemployed Workers’ Centres (DUWC), who provide advice services from their office in Chesterfield, as well as drop-in centres in and around North Derbyshire. So far, so routine. But at last week’s TUC meeting in Brighton there was a ruckus over their selling T-Shirts. 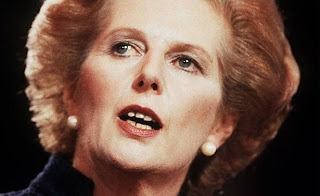 Still a divisive figure 22 years on

These asserted that “a generation of Trades Unionists will dance on [Margaret] Thatcher’s grave”, which, given some of the events that occurred on her watch, should surprise nobody, although some might find the sentiment offensive. But then Michael Foot, who led Labour during the early Thatcher years, had his memory ritually trashed by some on the right immediately after his death two years ago.

But all this was conveniently forgotten as the TUC and Labour were pressured to condemn the T-Shirts, which were removed from sale. But that was not the end of the matter: Mark Wallace, former stalwart of the so-called Taxpayers’ Alliance (TPA), discovered that DUWC receives grants from three councils. And then the old TPA logic leap kicked in, and public funding was thus connected to T-Shirts. 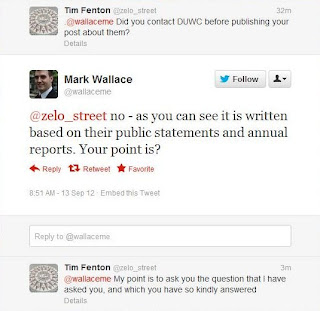 Don't bother getting the facts, just put the boot in

To be fair to Wallace, his blogpost does say “apparently taxpayer-funded” in its body text, but the “apparently” gets missed in the headline. And it was this that prompted the odious flannelled fool Henry Cole, tame gofer to the perpetually thirsty Paul Staines at the Guido Fawkes blog, to assert that the offending T-Shirts “are paid for out of the public purse ... the taxpayer is picking up the tab for this lot”.

And then the row escalated to Tory MP Conor Burns, who declared “To ask the taxpayer to pick up some of the bill to produce this Frankenstein merchandise is possibly unlawful”. Others piled in behind, and an Early Day Motion was put down, sponsored by David Morris and Peter Bottomley, who sit for the working class strongholds of Morecambe and Lunesdale and West Worthing.

Yet nobody actually checked with DUWC to confirm whether or not public funds had been used to produce the offending merchandise. And that is where the actions of Wallace, Cole, Burns and the rest unravel: the public funds granted to DUWC are given for specific purposes, principally their advice service. The campaigning side of the organisation is a totally separate affair.

The latter depends on fundraising, not public funds. We’ve been here before with the TPA, notably their “Taxpayer Funded Lobbying” that wasn’t. Whatever one’s views on the Thatcher T-Shirts, the fact of the matter is that DUWC does not receive public funds for their production. There is no illegality involved. Had Mark Wallace bothered himself to ask them, he’d have found out. But engagement is not the TPA way.

[UPDATE 14 September 1110 hours: the T-Shirt row has also been joined by occasional Tory and full time MEP Dan, Dan the Oratory Man, who has told his readers "Unbelievably, the 'unemployed' workers who produce them are taxpayer-funded".

See how Hannan did that? He didn't actually say that public funds were used in the production of the T-Shirts, and so stayed the right side of the defamation line, while making sure that this would be the conclusion drawn. Hannan has also touched on the passing of Michael Foot, telling how he disagreed with his politics, but did not celebrate his passing.

This is a characteristic false equivalence, ignoring those on the right who both celebrated Foot's death and happily trashed his reputation. Hannan is clearly joined with those trying to have DUWC defunded, although my information is that this is highly unlikely. In the meantime, Messrs Wallace, Cole and Burns are still not withdrawing their incorrect assertions regarding DUWC]
Posted by Tim Fenton at 18:32