Newton Dunn? He Certainly Is

As arrests continue to deplete the ranks of Rupe’s troops, a little local difficulty concerning Sun political editor Tom Newton Dunn has been rumbling on, largely unreported, even by the deeply subversive Guardian. Newton Dunn, who for some reason has gained the nickname “Olivia” along the way, has risen to a senior position at the people’s paper, despite having been to Eton.

He was previously defence editor at the Super Soaraway Currant Bun, during which time he covered stories such as the thoroughly regrettable episode of British troops caught beating Iraqi teenagers. Newton Dunn revealed that the soldiers’ commanders may have ordered them to do the deed, and his piece was headlined “Bullies following orders”, which might seem a little strange. 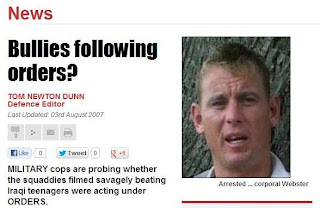 After all, what was being written up was an episode not so much of bullying, but of straightforward assault, probably occasioning actual bodily harm. Well, perhaps someone at the Sun involved in headlining copy wanted to hint at something, and that something has been the subject over recent months of dogged investigation by Labour MP Tom Watson, scourge of the Murdoch press.

Last February, Watson published a post titled “Exposed – The bullying culture at The Sun”, which suggested that Newton Dunn had been found guilty of bullying by an independent adjudicator looking at a complaint by the paper’s Whitehall editor Clodagh Hartley. Who she? Well, according to Watson, Ms Hartley is the real source of the Hutton Report scoop attributed for so long to Trevor Kavanagh.

So, as Watson notes, losing Ms Hartley would not appear to be a particularly sensible course of action for Dominic Mohan and the rest of the lads at the Sun, although Newton Dunn has, according to one of Watson’s sources, suggested she would not be returning after her maternity leave. His crystal ball is of remarkable clarity for someone apparently not involved in such decisions. 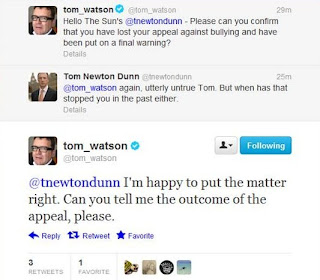 While Newton Dunn was clearly unhappy at being the object of Watson’s attention, it seems no action was taken following the post’s publication. And today battle has been joined once more as Watson has asked him via Twitter if it is true that the Sun man has been given a final warning following the loss of his appeal against a complaint of bullying.

Newton Dunn, while protesting that the suggestion is “utterly untrue” and that these are “sad little smear attempts”, has not denied that there was a complaint, or a subsequent appeal. Nor do we know whether some other kind of warning has been issued, or whether Watson’s suggestion of a warning over his Twitter usage has any basis in fact. But I suspect we will find out all of these things, sooner or later.

The age of Fleet Street Omerta is well and truly over. Good thing too.
Posted by Tim Fenton at 11:27