Hot on the heels of Prince Harry getting caught and photographed naked in Las Vegas have come the dastardly Frogs and the magazine Closer (prop. “Duce” Berlusconi) running photos of a topless Duchess of Cambridge at a supposedly secluded Chateau somewhere in France. Well, it clearly wasn’t secluded nearly enough, as someone with a long lens and an eye for a fast Euro was lying in wait. 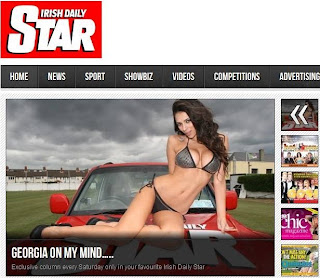 So while the Royals have instructed m’Learned Friends to lean on the downmarket garlic crunchers, media outlets around the world face a dilemma: do they publish and thereby also trouser a few of those marginal currency units, or defer to the monarchy (Gawd Bless ‘Er!) and declare that they are above such vulgar and tawdry behaviour? This time, those in the UK are unequivocally in the latter category.

But note the use of the term “UK”, as the English speaking part of Europe also includes the Irish Republic, which in turn also runs local editions of UK papers, and this brings us to the Irish Daily Star. This paper is a joint venture between Richard “Dirty” Desmond’s Express Newspapers and Independent News And Media. And it yesterday published the topless Kate photos.

Indeed, editor Mike O’Kane has shrugged off the suggestion that the photos are something exceptional: “The Duchess would be no different to any celeb pics we would get in, for example Rihanna or Lady Gaga”. He also reminded those of us on the other side of the border that “She’s not the future Queen of Ireland”. So what’s Dirty Des going to make of all this?

Well, he’s not at all happy. “I am very angry at the decision to publish these photographs and am taking immediate steps to close down the joint venture” he fulminated. But, as Mandy Rice-Davies once said, he would say that, wouldn’t he? If Des keeps schtum, his bête noir, the legendarily foul mouthed Paul Dacre, will drag out his past as a purveyor of adult magazines and give him a good kicking.

More relevant to the idea of pulling out of the deal are the quotes from Des’ company. Northern and Shell has said it is consulting lawyers “as a matter of urgency” over potentially “a serious breach of our contract”. So no immediate steps to close down that joint venture, then. And Independent News And Media aren’t singing from the same hymn sheet as Dirty Des.

They have merely said that publishing the Kate photos was “regrettable and in poor taste”. And if the Irish Daily Star is a profitable operation, I doubt very much that they will be pulling the plug. Moreover, I also doubt that Richard Desmond will follow through and cut off one of his nice little earners. Pretending to take the moral high ground only demonstrates that he’s just full of crap.

Because mere morals don’t come between Des and that Benchmark Of Excellence.
Posted by Tim Fenton at 10:49