Much excitement was generated yesterday by the Independent On Sunday report that there was a “Secret plan for four-runway airport west of Heathrow”. Not only was the whole thing “secret”, but it was also backed by the Chinese, and you know what that means – somebody who speaks foreign is involved. But the splash does not go into any detail as to where west of Heathrow might be suitable. 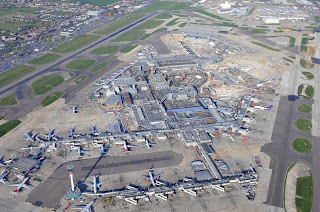 Heathrow ... getting rather busy

And saying “west of Heathrow”, or “north west of London”, not only covers a lot of possibilities, but also includes a lot of the countryside that is already well covered by housing and industrial premises. But we know that any candidate site needs to be well placed for transport links, and must be able to provide long enough runways, preferably on a similar west-east orientation to Heathrow.

Moreover, it is suggested that any site needs to be a maximum of half an hour’s travelling time from central London, although presumably that means the relevant terminal station – as with Victoria for Gatwick, and Liverpool Street for Stansted. So we’re looking at Paddington, or maybe Marylebone. From there, finding a suitable site is not the most difficult of exercises.

Outside the half hour range, but close to rail links and motorway network, is the site of RAF Upper Heyford, in Oxfordshire. The former airbase had a runway length of no more than 8,500 feet, but if the site were to be revisited, extending would not pose significant problems. The rail connection would take trains in and out of Marylebone – or perhaps Paddington, were the direct link from Northolt to be upgraded.

Perhaps Upper Heyford is too far out of town? Well, there’s another candidate that was a former airbase, and would be rather closer to the half hour criterion, especially after the rebuilding work at Reading and electrification has been finished. A site where there was until recently an RAF station with a runway of almost 10,000 feet in length, and a name that nobody will forget in a hurry.

Yes, just south of the town of Newbury is the site of RAF Greenham Common of cruise missile fame. The base has closed and the site returned to common land, but the previous use will put it high on the list of possibles if “west of Heathrow” is the choice. A rail link is close by – the main line from London to the South West – and the M4 is not far away. This would be a prime contender.

As for those who say “no way” or “it’s parkland and can’t be used for an airfield again”, well, that depends on the determination of the Government and relevant authorities to push any scheme through. The appetite for such a grand projet does seem to be growing (to the extent that the Mail thought it worth lifting the IoS piece for its own version). You have been warned.

And that goes for anywhere else in the area that had an airbase until recently.
Posted by Tim Fenton at 11:23

Or, more likely, somewhere in Buckinghamshire, where they wanted to build a huge airport in the early 1970s until key Tories invented the Thames Estuary schemes to kill it?

It's odd that the IoS piece mentioned Oxfordshire and Berkshire and not Buckinghamshire, which is at least flat in the northern bit (which is why Cublington was picked by Roskill in the first place - the obvious site is and always has been north west of London on the flat land around Aylesbury).

Berkshire's too built up, really. Oxfordshire's too far out of London for the 30 minute rule unless we're talking full on HS rail (Reading-London is about 25 minutes by HST on top quality alignment, so it would need to be >125mph to get much further out in the half hour).

Mentioning Oxfordshire and Berkshire was a bit of a giveaway. Reading used to be 22 mins from Padd in the early days of IC125 and with a stop there (opening up a shedload of connections to the rest of the country) you could get to close to Newbury in about 35 mins with electric traction.

Buckinghamshire would hack off too many well off Tory voters + reusing an old airbase site would be easier to push the process through. Bad news if you live in Newbury though.