Since the voters of South Derbyshire sent her packing with a vengeance in the Labour landslide of 1997, Edwina Currie has not been much on the radar, barring her admission of the affair that confirmed “Shagger” Major’s nickname, the odd appearance on reality TV, and of course a less than successful attempt at wowing the ballroom on Strictly Come Dancing. 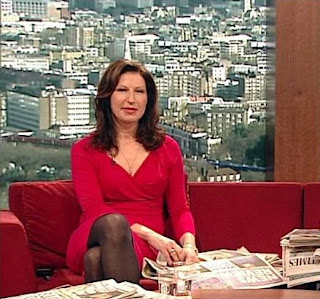 So I’ve not had any strong opinion over the woman who brought us the stand-up version of A Smile, A Song and A Salmonella Scare, other to be relieved that she’s no longer in Parliament. But today I have discovered that, despite her not always agreeable manner, and tendency to insert foot in mouth, Edwina must be highly sound, because Amanda Bloody Platell hates her.

As with groups like the so-called Taxpayers’ Alliance, whenever someone or something is targeted, it is always safe to assume that the opposite view is the best course of action. So when Mandy calls the former MP “vain, vulgar ... vile”, any residual criticism of Ms Currie can be safely dispensed with, especially as she is then accused of “delusion and cruelty to others”.

Yes, that accusation was made by someone with the delusion of usefulness, especially when provoking the kicking in of televisions across the country whenever she ruins Sunday mornings for many by turning up like the proverbial bad penny on the sofa of The Andy Marr Show (tm). And, as for cruelty to others, well, that comes with those appearances as well, the others being most of the audience.

And what has Mandy ever achieved, come to think of it? Not a great deal compared to Ms Currie, who has found time to win Celebrity Mastermind – which may not be the best place for Daily Mail hacks, pundits and Glendas – and put up with the slobbish, farting and whale-like John McCririck during a Wife Swap programme for which she looked to have regretted volunteering.

When Amanda Platell has actually achieved something other than churning out Z-list carping to the order of the legendarily foul mouthed Paul Dacre, and cluttering up the Marr sofa, then she might have some room to talk. Edwina Currie may not be everyone’s idea of a dance partner, but at least she’s lived a little.

So put your claws away Mandy, and find something useful to do.
Posted by Tim Fenton at 18:23

This may be Platell's "stopped clock" moment, because the evidence is that Currie is in fact vile and delusional.

Remember "Are you telling me people in this country are going hungry? Seriously? Seriously?"