Those who have observed the agenda of the legendarily foul mouthed Paul Dacre at work over the years will know that there are certain kinds of people who do not fit in with that agenda: these are not the Daily Mail’s kind of people. Those of an ethnic minority background – especially if they are followers of The Prophet – together with anyone who has been a single parent, are typical. 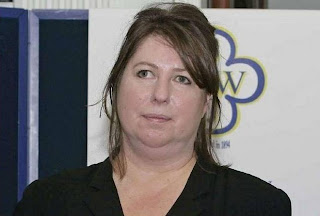 How high would nice Mr Dacre like me to jump?

On top of those are those in the public eye, especially if they have had the temerity to object to the behaviour of the press, and anyone who is not at least conservative with a small C. To these can be added anybody who has been divorced, and those who have been quoted approvingly by the deeply subversive Guardian, especially if they have succeeded despite the vitriol dumped on them by the Mail.

Many of these buttons are pressed by author Jo Rowling, author of the Harry Potter books which adorn so many childrens’ bookshelves. So it should surprise no-one that Dacre has ordered one of his bevy of bitter and catty Glendas to write a hatchet job on Ms Rowling’s first adult novel, The Casual Vacancy. To no surprise at all, this task has fallen to the deeply unpleasant Jan Moir.

Ms Moir, forever infamous as the Glenda at the front of the Dacre cab rank when the call came to ritually trash the memory of Boyzone singer Stephen Gately, does not disappoint her editor. First come sneering dismissals of the reviewer from the Guardian, and the BBC Arts Editor Will Gompertz (crazy name, crazy guy?!?!?), and then it’s time to kick the lefties.

The book is, according to Ms Moir, “more than 500 pages of relentless socialist manifesto masquerading as literature crammed down your throat” whilst its author is “the kind of blinkered, Left-leaning demagogue quick to lambast what she perceives to be risible middle-class values, while failing to see that her own lush thickets of dearly held emotions and prejudices are riddled with the same narrow-mindedness she is so quick to detect in others”.

Moir is not keen on the book’s characters, and “their liberal use of the F-word”. Heck, one of them even uses the C-word, so anyone who has endured a Daily Mail editorial meeting – like her – should be right at home. But she’s not through yet: the book is all about class warfare! It features a council estate and the author dares to sympathise with the residents! There are Asians in the vicarage!

It sounds very much as if Ms Rowling has veered too close to the real world for this to be a comfortable experience for the Daily Mail’s kind of people. But fortunately, Jan Moir’s hatchet job is so lame and amateurish that it is unlikely to dent the prospects for The Casual Vacancy. Good thing too.

But it keeps the odious Glenda in paycheques, so that’s all right, then.
Posted by Tim Fenton at 11:14

The current top rated comment underneath is a thing of beauty:

"Thanks for that Jan, although seeking the opinion of a third division hack on the work of one of the world's most successful authors is a bit like asking somebody who has completed a level one First Aid course what they think of the work of a leading transplant surgeon.

I doubt she's even read it.