The great paradox of rail and air travel is that, while these are nowadays the two safest travel modes for distance covered, the Fourth Estate sets great store by frightening readers by wildly exaggerating any kind of incident involving either mode, while proving reluctant to pony up the numbers showing that the frighteners are not justified. This was illustrated superbly by a recent incident at Birmingham Airport. 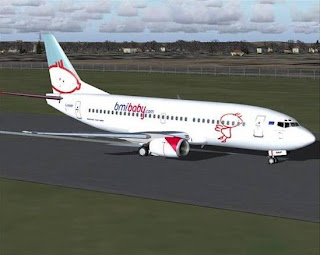 Monarch Airlines, who began operation as the house airline of tour operator Cosmos in the late 1960s with second-hand Bristol Britannia aircraft (and, yes, these are part of my memory of air travel experiences), have of late needed to hire in aircraft to meet schedule commitments. This included a 300 series Boeing 737 of Lithuanian carrier Aurela – until last weekend.

This aircraft was working a sector from Nice to Birmingham on Friday lunchtime. The flight was uneventful, although passengers reported a juddering movement when taxiing at Nice prior to take-off. Approach and landing at Birmingham were also as expected. Then, as the plane taxied from the runway to the terminal, there was more juddering and it left the paved taxiway, coming to rest on the grass.

All of this suggests that there was a problem with steering the aircraft while on the ground. There was no panic and all passengers were disembarked safely. But for at least one paper, this was not enough. There had to be “terrified tourists”. Yes, the Daily Mail, scourge of all sexed-up copy, sexed its copy up. And the stuff they made up on the fly is very, very obvious.

“Terrified tourists evacuated from Monarch plane after it overshot the runway and skidded onto grass at Birmingham Airport” screams the Mail headline, which is two porkies already: it wasn’t a Monarch plane, and it didn’t overshoot the runway. But where the Mail veers off its own paved surface is when it introduces “An aviation source at the airport”, who clearly knows nothing about aviation.

“One minute you are experiencing a normal landing, the next your [sic] skidding all over the place” it tells. But the landing had been completed, and there wasn’t a skid. “If the plane was coming in at speed, it's a dangerous way to come into land”. It had already landed (see above). “A wet runway could have been a factor but shouldn't have been if everything was working probably [sic]”. See above (again).

And on it drones: “He could have just simply have been going too fast and misjudged the landing”. Bullshit (also see above). “If one reverse thrust engine was on more than the other, that can also cause imbalance”. It wouldn’t have produced the same result (and again I say see above). This contribution is one of towering ignorance and has clearly been made up. It’s blatant scaremongering. It’s bang out of order.

But it gets a few more copies sold, and ups the page hits, so that’s all right, then.
Posted by Tim Fenton at 14:35

Briiant blog. As a safety instructor for a UK carrier I'm always incredibly depressed with all news coverage of incidents. Even journalists at the BBC often display rank ignorance of the basics of aviation.

p.s. you missed the fact that the Mail said the aircraft was evacuated, it wasn't it was disembarked normally, slides are required to be classed as evacuation.