Another day, another lookalike for you lucky people. And not for the first time, we contrast someone appallingly pretentious who can’t get into their head that many see them as a figure of fun with a figure that is equally pretentious, and equally a figure of fun. We remain in the fertile territory of right-wing Clever People Who Talk Loudly In Restaurants, where the finest specimens of empty pretentiousness can be found. 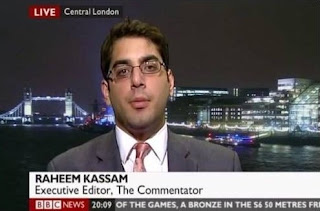 And here is today’s example of pretentiousness made reality: he wasn’t important enough for Wikipedia, but Raheem Kassam, PR man for the Henry Jackson Society (HJS) and self-styled “executive editor” of serially dishonest group rantfest The Commentator, strikes a very important pose. Laid back, self-assured and with that air of academic aloofness – who could that remind you of? 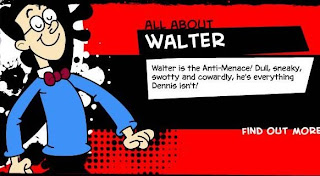 Another pretentious figure of fun

Well, that’s not a very difficult one for those whose light reading matches the cerebral level of The Commentator and HJS. Yes, if you’ve ever read the equally challenging Beano once in a while, you’ll recognise those qualities in Dennis The Menace’s smug adversary Walter The Softie. Kassam hasn’t yet graduated to openly wearing a bow tie, but give him time and he’ll be there.

As to the qualities required, he fits the bill too: Walter is described as “dull, sneaky, swotty and cowardly”. Yep, that’s Raheem Kassam in a nutshell. Or even a wingnutshell.

More lookalikes to follow, folks. It’s daft not to.
Posted by Tim Fenton at 17:24