Del And Booker – Not Waving But Drowning

Last week was not a good one to be a climate change refusenik: this year’s smallest extent of Arctic sea ice, which 40 or so years ago measured around eight million square kilometres, recorded a record low of less than 3.5 million. Moreover, this was over half a million less than the previous record low (recorded in 2007), despite beginning from a higher starting point. 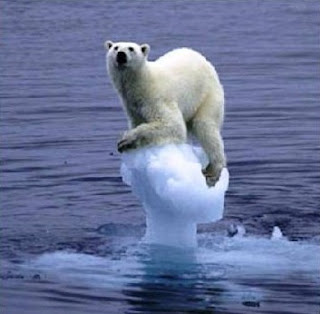 This was on top of earlier news that this year, the Greenland ice sheet had experienced melting across the whole of its surface. That event caused much constructive spinning from the usual suspects, who tried to suggest that NASA, the BBC, and anyone else they didn’t like had suggested that the entire ice sheet had melted, but of course they had not.

So no doubt there will be more accusations levelled against the deeply subversive Guardian, the BBC (again), Friends of the Earth, Greenpeace, and WWF, though the evidence looks on the face of it to be clear cut. The melting of Arctic sea ice has brought that record low, despite climatic conditions not looking conducive to it. So what form will the sceptic charge take this time? 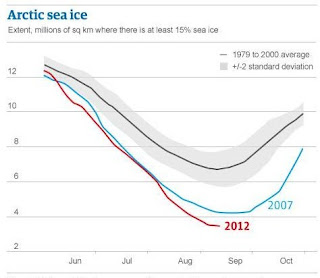 Well, from the likes of James “saviour of Western civilisation” Delingpole there will no doubt be wall to wall abuse, just for starters. Del Boy’s latest tilt at this particular windmill included him suggesting that Labour MP Barry Gardiner was “vilely dishonest or just incredibly stupid” and calling him “Dork brain”. Gardiner’s sin had been to discuss effective subsidies given to fossil fuels.

But while Del was ranting and frothing, the wind power on which he has poured so much scorn was breaking records: last Thursday night, it hit a maximum of 3.98GW and sustained more than 3.5GW overnight, which for a total demand of 34.9GW, meant it was supplying over 10% of the UK’s electricity. This supposedly expensive power source thereby drove the spot prince down by £1.60 per MWh.

His mentor Christopher Booker has also been busy spinning: after suggesting that green groups have been sidelined by Government and suggesting that ministers like Ed Davey have said things they certainly haven’t (check Booker’s suggestions with actual quotations in the Guardian piece on Arctic sea ice), he then reverts to telling his more impressionable fans that shale gas is just around the corner.

Spin and abuse cannot deflect reality. Get over it, denialists.
Posted by Tim Fenton at 13:05

Gee, what a nasty piece of writing - Arctic ice may be down currently .... but it'll be back up again and then you'll hear nothing from those that are now saying the sky is falling - sad but that's the cycle of things here is it not. Failed to rate a mention that the Antarctic ice is currently1 million Sq Km ABOVE normal.
http://www.climatedepot.com/a/17467/Antarctic-Sea-ice-is-currently-1-Million-Sq-Kms-ABOVE-NormalSee-chart-here
Gotta wonder too what is happening sub-arctic? clearly some warmer water being driven into the region .... underwater volcanic activity springs to mind but does not get a mention either.

What's all the rot about your ridiculously expensive wind turbines operating a little better - for one night at least - not driving the price of electricity up quite as high as it normally does is more to the point (for one night).

One other thing, can you explain your motivation behind putting up a picture of a polar bear clinging to a little ice-float? Is it your suggestion still that Polar bears are dying out as a result of your fantasy-world AGW even though numbers are well up to numbers not seen since around 1960.

Is that really the best you have to back your argument? Time to take a new angle or change your argument altogether.

All views are welcome, even those that cannot do any better than cite denialist sources.

By proportion and by absolute value, the Arctic numbers are far greater than those for the Antarctic. I also note that no reference is made to the summer minima for the latter area.

"Is that the best you have" is a sign of intellectual bankruptcy, which figures, as the rest of your comment is just snark. Which more or less sums up the antis.