So Farewell Then Sid Yobbo

The news that Derek Jameson, who edited three national newspapers when they really were Fleet Street titles, had passed yesterday at the age of 82 closes the door that bit further on the last of the ranks of those who worked their way up through the business and built circulations through a natural ability to connect with readers. Only Paul Dacre of the Mail is left from that category. 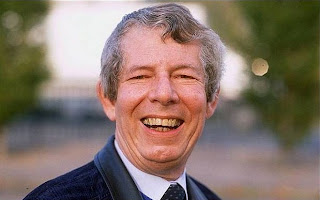 Man with sense of humour

And the two were very different characters: Jameson was considered fair and even handed by those who worked for him, while Dacre is notorious for his bullying and foul mouthed tirades. After he had been removed from the editor’s chair at the Screws – he had previously run the Daily Express and Daily Star – by the less than benign actions of Rupert Murdoch, he made a new career in broadcasting.

Jameson fronted the BBC show “Do They Mean Us?” which took a sideways look at the portrayal of the UK by foreign broadcasters. It was amusing and, yes, rather chummy: Jameson would sign off by saying to camera “Do they mean us? They surely do” in that distinctive London voice, which was reassuring to many TV and radio viewers and listeners, but hated by Private Eye.

The way the Eye treated Jameson is another reminder that the magazine, under the editorship of Richard Ingrams, took a very public school attitude towards those with regional accents and those it considered less educated and less well travelled. So it was no surprise at all to see Jameson characterised as Sid Yobbo, especially as it was sensed that he had a thin skin where his background was concerned.

Whether it was an urban myth or not, the characterisation of Jameson as being so ignorant that he thought “erudite was a kind of glue” would not go away. But his affable and natural approach endeared him to millions of Radio 2 listeners, and for many years, so ultimately he had the last laugh. He had climbed to the top of the greasy Fleet Street pole and successfully reinvented himself afterwards.

They really don’t make them like Derek Jameson any more: the days when every national newspaper had reporters in every major city, journalists who had learnt their trade the hard way, and sub-editors who were ferociously knowledgeable and able to save many a hack’s poor research or dodgy prose, are long gone. So farewell then, Sid Yobbo. This time they really did mean you.

[UPDATE 20 September 1645 hours: the Eye has remembered Derek Jameson - a week later than Zelo Street, as it only comes out once a fortnight - with blank verses from the otherwise anonymous pen of Eric Jarvis Thribb.

And guess what? The Thribb tribute begins with the exact same words as mine. As Jameson might have asked, "Do they read me? They surely do"]
Posted by Tim Fenton at 14:33