Dramatic licence has its limits, and a piece in today’s editions of both Mail and Express points this up superbly. A man was detained by Police in the Medway town of Gillingham on Friday of the previous week after jumping the barriers of a railway level crossing and narrowly avoiding being collected by a passing train, which, given the comparative masses involved, would have been instantly fatal. 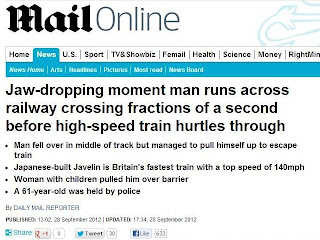 But this is not sufficient for the papers involved, so readers are told that he narrowly missed “a 140mph train”. As any fule kno, whatever the potential top speed of any train, the line speed at the location concerned is what is relevant, and in this case it is just 60mph. Moreover, no railway line in the UK with level crossings on it is cleared for a speed over 100mph.

The Mail goes further, and tells that the Javelin train, operated by SouthEastern, is “Britain’s fastest train”, which, despite advertising this claim, it is not. The Eurostar trains are capable of 186mph, and regularly exceed 140mph on the part of the London to Paris and Brussels runs on this side of the Channel Tunnel. Trains that work the East and West Coast Main Lines are both potentially capable of 140. 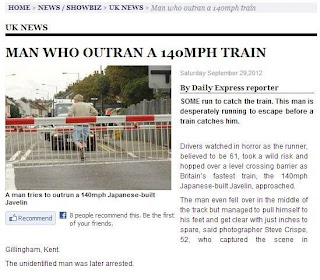 And the Mail piece also manages to invent a feature called a “train tower”, which suggests that someone is looking in the Stateside book of rail terminology. In this country it’s a plain old Signal Box, or Crossing Box. And the Javelin trains don’t have a separate engine, so there isn’t a “thundering engine”. All of that demonstrates the perils of not getting copy read for technical accuracy, and over-dramatising.

That obscures that real tragedy of the situation: only at the end of the Mail article (and not at all by the Express) is it noted that Police later detained a 61 year old man under the provisions of the Mental Health Act.
Posted by Tim Fenton at 17:23