Many more unfortunate souls have recently been sent down the road by the empire of Richard “Dirty” Desmond, as staff cuts were imposed on his newspapers following the less than stellar performance of his Health Lottery. But there are still papers to get out there, and websites to maintain and update. So it’s a case of getting those priorities right, and putting the resources where they’re needed. 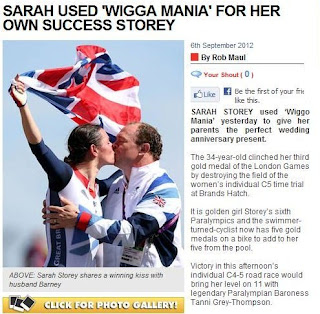 Sadly, though, the websites don’t seem to be faring too well, as one look at the Daily Star one shows: “Sarah Used ‘Wigga Mania’ For Her Own Success Storey” reads the title of a piece about Paralympian cyclist Sarah Storey. Wigga? Perhaps it’s a little known female form of “Wiggo”. Maybe whoever was on headline duty just had a meal at Wagamama. Whatever. 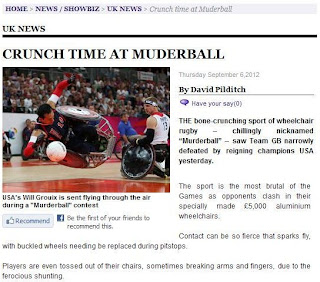 Things are no better over at the Express, where a new Paralympic discipline has been invented by whoever was doing the headlines there: “Crunch Time At Muderball” it proclaims, as wheelchair rugby is introduced to the dwindling band of readers. Athletes, the piece tells, are routinely thrown from their wheelchairs by tackles. Like the one Des might inflict on whoever made that howler. 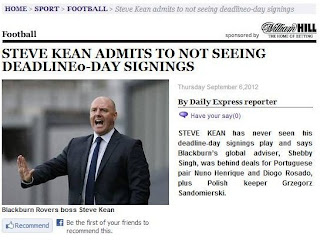 But the Express does not merely report on the Paralympics: there is the new football season to cover. And in a story about Blackburn Rovers comes another slip, reporting “Steve Kean Admits To Not Seeing Deadlineo-Day Signings”. Deadline O’Day? Who did he play for before joining Rovers? Or is he a Radio Five Live commentator? Does he have a brother called Break? 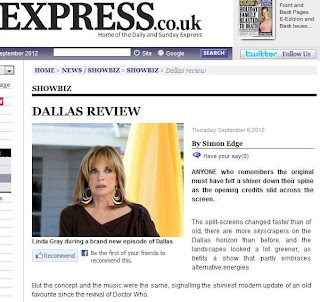 Yes, priorities, priorities indeed. And just to show where the priorities of the Desmond empire really lie, the Express has a lengthy piece by Simon Edge reviewing the all new series of Dallas. Er, what? The one about Texas and Oil and Money? Yes, that one. And Edge tells readers breathlessly that this is “the shiniest modern update of an old favourite since the revival of Doctor Who”.

Yeah, right. And anyway, why expend all these scarce resources on spinning another recycling of an old series and yet another Stateside import? Well, that might just have something to do with the all new Dallas being shown on Channel 5. Which is owned by none other than Richard “Dirty” Desmond himself. Which is also, I’m sure, mere coincidence.

Shameless cross publicity for free? We all know what that means: another Benchmark Of Excellence.