One truly hates to mock the afflicted, whatever the temptation. But in the case of clueless washed-up hack Dennis Rice, who styles himself Tabloid Troll, I am about to make an exception. Why so? Well, because poor Dennis, who has already dropped an only moderately large clanger in wrongly accusing the author of the excellent Tabloid Watch blog of being an “Islamist”, has done it again. 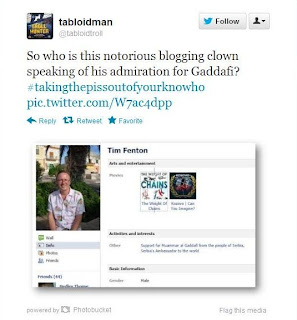 Showing the whole world why – as if anyone needed to know – the Mail has only featured one by-line by him all year, Rice has decided that I am a supporter of the late and legendarily flatulent Libyan leader Muammar Gaddafi. Furthermore, he has also decided that I am a supporter of Serbia. Wow. I never even thought about such things, yet here I am supposedly doing them. How come? 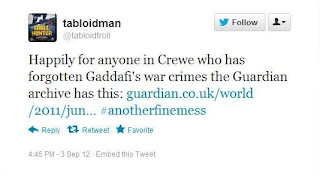 ... followed by a little popular incitement ...

Well, Den has been rummaging around Facebook, as sad and useless hacks seem to like to do of an afternoon, and he has found someone called Tim Fenton. Hey, he thinks, that’s the SOB from Crewe who keeps making me look like a total idiot! I’ve got him! Wha-hey, it’s payback time! Yes, Rice couldn’t contain his excitement, but enough of his hygiene problems. 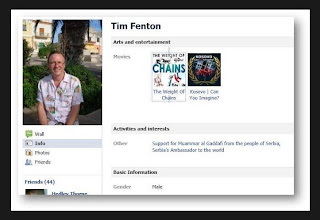 ... only to have found the wrong bloke

And this Tim Fenton says in his Facebook interests “Support for Muammar al Gaddafi from the people of Serbia, Serbia’s ambassador to the world”. So Rice has taken two and two and made a number that does not equal four. Why so? Well, I hate to burst this particular bubble, but the bloke with that Facebook page is not me. I’ve no connection with Serbia – or Libya. Never have had.

Moreover, that’s before we get to the blatant wearing of a shirt without a visible volume control in a style which I don’t happen to possess. And I can think of at least two other blokes called Tim Fenton – one a consultant, the other a former BBC staffer – who are also not me. So just to save time, Den, don’t go after them on my behalf. You’ll just end up looking even more stupid.

And to think that, once upon a time, Dennis Rice was “investigations editor” for the Mail On Sunday. Investigations? This congenitally stupid fool couldn’t investigate his way out of a paper bag. But he may be advertising soon for someone to help him take his foot out of his north and south.

But make sure you get cash up front, mind. Remember, he’s only managed three by-lines at the Mail since the start of last year. And don’t laugh so loudly. It’s rude. After all, he can’t help being such an idiot.

[UPDATE 4 September 1145 hours: Dennis Rice took this post rather badly - clearly, failed hacks do not readily accede to Healey's dictum - and spent a characteristically obsessive amount of time yesterday evening on Twitter ranting and blethering at whoever was listening. One of those so inclined was Anthony Bonnici, who is apparently employed and paid good money by the Evening Standard. 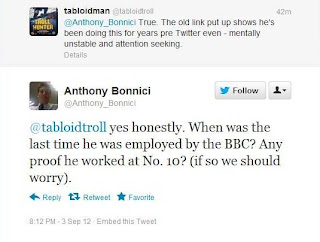 Bonnici, sadly, could not be bothered to check his facts - this does seem to happen rather lot among supposedly real journalists - and asked "When was the last time he was employed by the BBC?" to which the answer is that I have never been employed by the BBC. Nor am I connected to Serbia and Libya, or a consultant formerly possessing a similar email address.

But I am someone who is demonstrating just how terminally clueless rather a lot of journalists really are]
Posted by Tim Fenton at 19:04