When it was revealed last Friday before Mr Justice Vos that News International (NI) may face as many as 230 compensation claims as part of the fallout from Phonehackgate, and that 395 individuals had applied for disclosure of evidence from the Metropolitan Police, some in the Murdoch empire might have thought that the end of the whole sorry saga could now be in sight.

Some chance: the man who brought us Phonehackgate, Nick Davies, has taken to Twitter today to point up a piece from the deeply subversive Guardian regarding the activities of one hack at the Super Soaraway Currant Bun. That Davies has taken this action and suggested there may be more to come should alert media watchers who will recall how the hacking scandal broke in 2009.

Then, for a variety of reasons, not all the information could be revealed at the outset, with the result that a number of right leaning bloggers and pundits who should have engaged brain before mouth immediately denounced the Guardian for indulging in what was portrayed as the rotten lefties getting at Andy Coulson as some kind of payback for Damian McBride’s excesses. 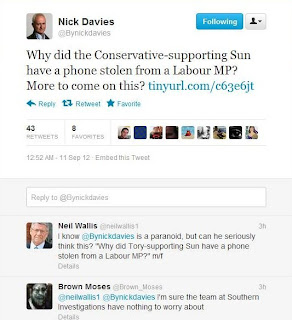 But Davies was right on the money, having been alerted to this new part of what his must-read book Flat Earth News called “The Dark Arts” by a singularly ill-advised outburst by Stuart Kuttner, now facing charges along with a number of other Murdoch luminaries. And onto Twitter this morning has come another Kuttner figure in the shape of Neil “Wolfman” Wallis, to accuse Davies of paranoia.

But the facts suggest otherwise: a 35 year old Sun hack had been arrested and bailed as part of Operation Tuleta. The charge was one of handling stolen goods, which appears to be a mobile phone. Now, Siobhain McDonagh, Labour MP for Mitcham and Morden, has begun legal action against NI relating to the theft of her mobile phone, alleged invasion of privacy and breach of confidence. 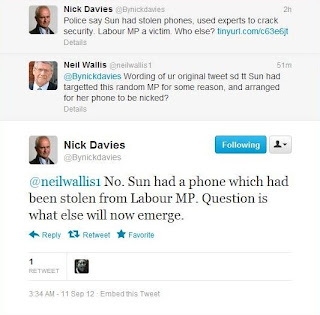 ... and how Davies puts him straight

Think about that: this is totally unconnected to Phonehackgate. All of that is in the past: this matter pertains to the here and now. The impression is given that, far from cleaning up the stables as has been claimed, Rupe’s downmarket troops have merely found new ways to spy on those whom they choose to go after. And the inference from Davies is that there is more of this to come.

And the response has been exactly as before: Wallis, like Kuttner, has come out fighting, smearing Davies and suggesting that there’s nothing to see and we should all move along quietly. But, like Kuttner, the thought enters that he doth protest too much. Zelo Street will be keeping close watch on this one: I called it right back in July 2009, and reckon this one has more to come. Keep watching, folks.
Posted by Tim Fenton at 12:54

Ah once again it's "One rogue reporter"