Czech born actor Herbert Lom, who has passed at the age of 95 – now that’s an innings, and then some – starred in many films, but will be remembered not for his portrayal of Napoleon Bonaparte, or any one of a number of suave villains, but as Chief Inspector Charles Dreyfus, playing opposite Peter Sellers in the Pink Panther series, starting with A Shot In The Dark in 1964. 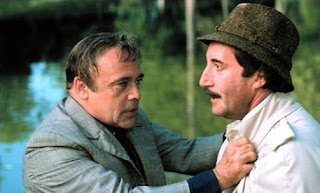 The formula was much the same with each appearance: Sellers’ Inspector Jacques Clouseau, with the cod French accent becoming ever more eccentric with each film, would literally send Dreyfus mad with his bungling. The idea was spiced up for The Pink Panther Strikes Again, with Dreyfus escaping from custody and overseeing the construction of a doomsday weapon to bargain against getting Clouseau.


But perhaps the most memorable moment comes in the final completed film, Revenge Of The Pink Panther, as Dreyfus has to give the eulogy at what is believed to be Clouseau’s funeral (except the dead man is actually a criminal who hijacked Clouseau’s car at gunpoint). Dreyfus appears overcome by emotion, but is actually having to restrain himself from laughing.

It’s a sublime comedy performance, and shows Herbert Lom’s versatility as an actor. The Pink Panther films may have been about Sellers first, but they would have been unthinkable without Lom.

Having never been a fan of the Pink Panther films, I remember him mostly from the Ladykillers.... a sad loss of such a wonderful actor.