Sarah Vain On The Misery Train

When Ministers of the Crown are under pressure, it’s understandable that the mood in their households may become less than totally happy. But the domain of Michael “Oiky” Gove gives every impression of having descended into downright misery, if today’s mean-spirited rant from his wife Sarah “Vain” Vine is anything to go by. Ms Vine is in no mood to be concerned at others’ wellbeing. 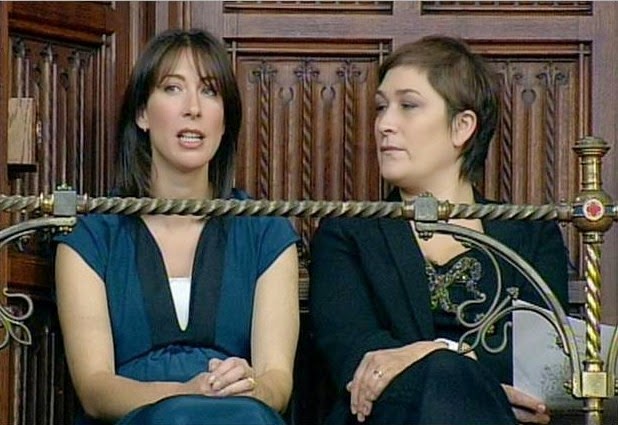 Sarah Vine - the happy one on the right

“Trapped behind a London bus the other day, I was confronted with a thoroughly depressing sight. On the back was a public information poster, illustrated with a drawing of an unsteady female, complete with micro-mini-skirt and platform heels. The message was simple: drivers, be mindful of tipsy pedestrians falling into the road in front of you” she observed, scornfully.

Then she segued effortlessly into Daily Mail Speak, with “But what I found so puzzling and offensive was the fact that it was aimed at the unsuspecting motorist, as opposed to the actual drinker who might be stupid enough to lurch into the traffic. Doesn't that speak volumes about the kind of world we inhabit?” Well, no it doesn’t – it’s a public information announcement. What’s her problem?

Here it comes: “£3.5 billion a year is spent on treating patients for the effects of alcohol; at weekends, up to 70 per cent of A&E admissions are alcohol-related ... Areas such as care for the elderly, that are manifestly more deserving than some silly girl who's drunk her own weight in Bacardi Breezers and who is slumped unconscious in a pool of her own bodily fluids”.

And, as Jon Stewart might have said, two things here. One, most folks who go out to the Rub-A-Dub and become Elephants Trunk And Mozart do not intend to end up in the local A&E – and, with crime figures falling, according to the Government of which her husband is a member, there is less bad behaviour of an evening, although it would be nice if there were none of it at all.

Two, we don’t have someone on the door of A&E breath-testing arrivals and then declining treatment to those who have been on the pop. Ms Vine shows a very worst case scenario – in typical Daily Mail style – whereas most of those in A&E late at night are not threatening the staff or chucking up on the floor. And the mean-spiritedness has a little further to run.

Ms Vine wants readers to know that she attended A&E recently: “Because of the general blood, mess and shouting, the rabble had to be treated first”. Yeah, someone else is getting something that they don’t deserve! It’s like all those migrants – they get treated first, too! Why oh why oh why oh why?!? Yes, Sarah Vine is settling in to being a Daily Mail commentator very well.

It must be terrible being so miserable. And in the same house as “Oiky” Gove, too.
Posted by Tim Fenton at 11:48

The phrase "Trapped behind a London bus" tells you everything you need to know about her sense of entitlement.
Not for her the public transport that millions of Londoners use every day. No. A private car, probably chauffeur-driven, to keep her away from the rabble.

Good report on the way home.

Hospital admissions last year due to drink in West Yorkshire

The last figure is not a typo. Oldies are worse for drink than the youngsters.