The Sunday Times, which has long ceased to be a paper of record or repository of ground-breaking journalism, is the latest to climb on the bandwagon of those sneering at Mil The Younger in an effort to damage the Labour Party and hopefully deliver The Blue Team to majority power next year. It has accomplished this by over-egging comments made by MP Jon Cruddas. 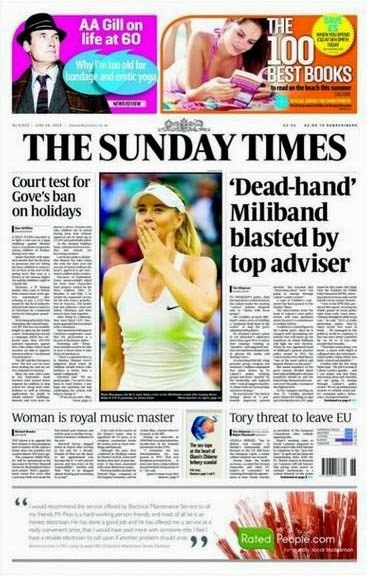 Cruddas is – rightly – concerned that the “big ideas” and the bold approach, which would give voters a clear choice between the major parties, are not being brought forward. That is bound to cause frustration, and he has apparently let that be known in a conversation which was, whether he knew it or not, recorded. But it’s hardly the stuff of game-changing headlines.

The Murdoch press’ natural reaction has been to call “split”, this being something that they know is likely to turn voters away from parties, but this, and other screaming denunciations of Miliband, many of which are personal, do not appear to be having the desired effect, as two opinion polls out today show. And one of the polls brings terrible news for the Tories.

The Sunday Times’ own poll – from YouGov, the same pollster used by the Sun, although results not meeting the Murdoch narrative tend not to get reported in the latter paper – shows a Labour lead of 4%. Moreover, YouGov has shown a lead for The Red Team of between 3% and 4% across the latter half of June. That suggests the Miliband bashing is not having an effect.

Worse, the Mail On Sunday’s poll today, which comes from Survation, brings far worse numbers: here, Labour holds a 9% lead, with the Tories well below 30%, and UKIP still showing over 20%. This would be enough not just to put Miliband in Downing Street, but would deliver him a majority of almost a hundred. Some of the names that would be on their way out may find the prediction disturbing.

They would include Charlotte Leslie in Bristol, David Nuttall in Bury, Gavin Barwell in Croydon, Charlie Elphicke in Dover, Angie Bray in Ealing, Ben Gummer in Ipswich, Stewart Jackson in Peterborough, Penny Mordaunt in Portsmouth, Jacob Rees-Mogg in Somerset, Rob Halfon in Harlow, and both Alok Sharma and Rob Wilson in Reading. And, yes, Graham Evans and Edward Timpson closer to home.

Things may improve for the Tories between now and next May. But, with the probing into possible corporate charges against the Murdoch empire – which could being bad news for those closest to Rupe and his current and former troops – the potential for bad news for Cameron is enormous. The Tory-supporting part of the press is free to keep on sneering at Miliband, but so far it does not seem to be working.

And, what is worse, this is one strategy that does not appear to have a Plan B.

[UPDATE 30 June 1200 hours: Mike Smithson at Political Betting has Tweeted the result of a Populus online poll, which confirms a widening lead for Labour.

The numbers show their lead over the Tories has increased from just one point to a full 4%, the same figure as the YouGov poll quoted above. Moreover, it shows a trend away from the Tories, and towards Labour.

There may be other factors at work here, such as the hacking trial and Cameron's less than successful trip to Brussels last week, but the fact remains that Miliband bashing is not working. End of story]
Posted by Tim Fenton at 11:37