The tendency for London’s Tory councils to leap into bed with property developers was all too visible in Hammersmith and Fulham, with the scheme to “redevelop” the West Kensington and Gibbs Green estates, along with the Earl’s Court exhibition centre, which may not now go ahead following the Blue Team’s ejection from power. But elsewhere in south-west London, council tenants may not be so fortunate. 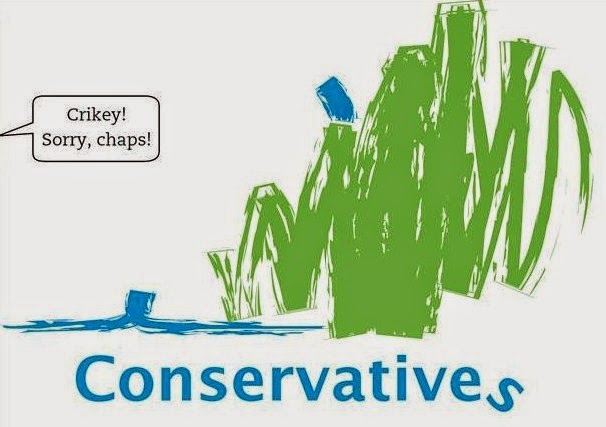 The Royal Borough of Kensington and Chelsea (RBKC) has no threat to Tory rule, with 37 out of 50 seats secured last month. Here, a potentially controversial new feature will be a station on the Crossrail 2 line. This was slated to be in the area of Chelsea fire station, but, as those on the World’s End and Cremorne estates found out recently, someone has decided to explore a site further to the west. 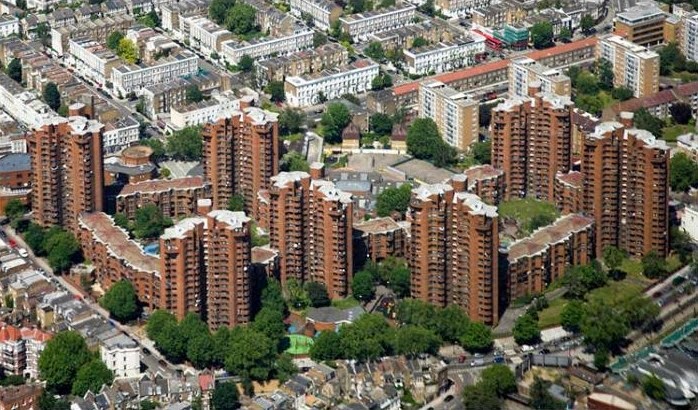 World's End Estate from the air, with the Cremorne Estate at top right

World’s End estate dates from the early 1970s: a mix of medium rise and tower blocks, it has worn rather better than 1950s and 60s developments. Residents have known for some time of rumours regarding the dread R-word, as in redevelopment, but what was not expected was that Crossrail 2 would be used as cover, and by what appears to be the personal choice of the council leader. 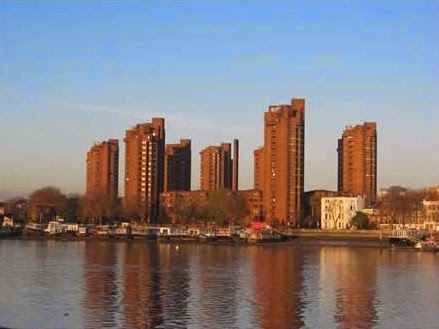 World's End Estate viewed from across the Thames

A notice dated 10th June has been posted on the estate, and makes worrying reading: titled “Crossrail 2 Consultation”, it tells “Transport for London is about to start consulting on the proposed route for a Crossrail 2, including a station in the Borough. Previously its preferred option was to locate this station on the King’s Road near the fire station”. And then comes the however. 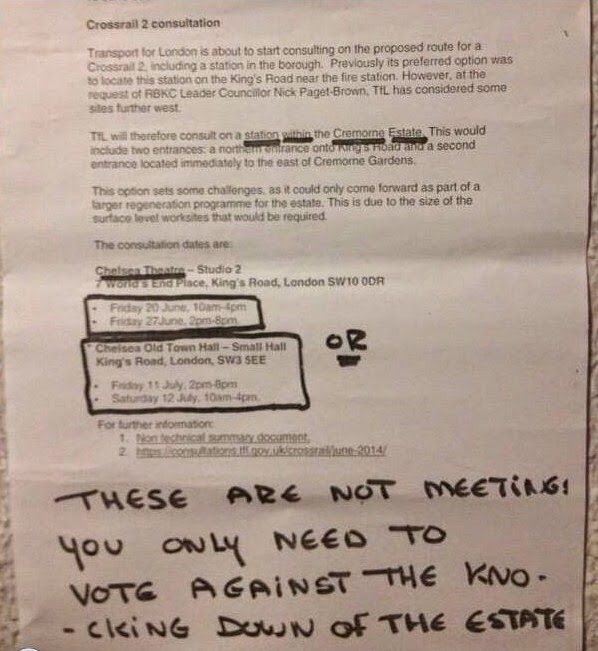 What the unsuspecting residents saw

“However, at the request of RBKC Leader Councillor Nick Paget-Brown, TfL has considered some sites further west ... TfL will therefore consult on a station within the Cremorne Estate [next to World’s End]. This would include two entrances: a northern entrance onto King’s Road and a second entrance located immediately to the east of Cremorne Gardens”. That spans Cremorne and World’s End.

Then comes the R-word: “This option sets some challenges, as it could only come forward as part of a larger regeneration programme for the estate. This is due to the size of the surface level worksites that would be required”. The Residents’ Association appears to have added “Urgent – Please Attend to Vote ... These are not meetings – you only need to vote against the knocking down of the estate”.

So there you have it: the proposed Crossrail 2 station has been moved around 1km west so that it would be located directly under the Cremorne and World’s End estates. This would then be used as cover for a money-spinning “redevelopment”, for which read demolition, followed by replacement with upmarket properties which might just be out of reach of displaced tenants.

Please look at the attachment - sheet 7 which clearly shows the greyed out area that TFL and Crossrail2 propose as the access point in ChelWest. I've searched, painstakingly, through both the TFL and Crossrail2 websites and, contrary to what the self-appointed chair of the Cremorne RA has to say in her letter, there is NO mention of the Cremorne Esate within these websites. The consultation has been ongoing since last year - maybe said 'Chair' should be a little more on the ball. Also, the drop in sessions are NOT a vote.

The TfL map of the Chelsea West option shows the station at the other side of the King's Road.

I'm not sure that those safeguarding instructions contain anything for the station, as they are dated 2008.

The Chelsea West option has only been tabled in the past year.

A document from six years ago (2008) is completely worthless. The Council came up with the proposal last summer (on the sly, as usual).

The current proposals would require the demolition of most of the Cremorne Estate to facilitate construction of a Crossrail 2 station underneath. Think of the large holes in the ground required for Crossrail 1 stations at Bond Street and Tottenham Court Road and you'll have a pretty good idea of what we're talking about.

As someone who supports Crossrail 2 in principal I am disgusted by the Council's use of the scheme as cover for its own nefarious plans to "regenerate" the area.

And where the hell are the Ward Councillors? Hiding under a rock? At this rate, roll on 2018!

The notice on The Cremorne Estate is a leaked notice on KCTMO headed paper.

They knew a year ago! Go to rbkc website. Cllr Tim Coleridge wrote to Boris Johnson on Aug 2013 making a case for this site. I love being described as underprivilidged!

We call for Greg Hands MP to come out in support of The Cremorne Estate.