Another weekend, another edition of The Andy Marr Show (tm), and, to the consternation of all those who generally support the Beeb in the face of the continued assault from the right-leaning part of the Fourth Estate, another less than totally critical interview given to Nigel “Thirsty” Farage, where he has been able to effectively give a party political puff for UKIP. 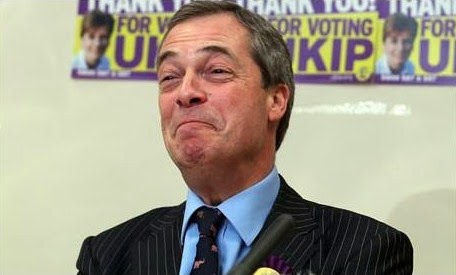 The facts make less than convincing reading when it comes to accusations that the Corporation gives the chief Kipper too much airtime: Farage has appeared, for instance, on flagship debate show Question Time 16 times since 2009. As the deeply subversive Guardian has pointed out, this is more than all appearances by those representing the Green Party, which has managed just 11 all told.

Moreover, other UKIP stalwarts, such as Paul Nuttall, Diane James (the party’s candidate in the Eastleigh by-election, and now an MEP) and Patrick “Lunchtime” O’Flynn (formerly pundit for the Daily Express, aka Daily UKIP, and also now an MEP), have appeared on the programme. Farage was on the Marr Show during the election campaign, too.

And the show on which Mr Thirsty appeared also featured Mil The Younger, who gave as good as he got in the final few minutes. The difference today was that UKIP got a prime interview slot, and Labour got nothing. Think about that: Her Majesty’s Opposition not featuring on the Marr Show, but Farage getting another chance to tell that his party would reduce everyone’s taxes.

But then, he also agreed that UKIP would have “a grammar school in every town” and bring back the kind of selective education that consigned most pupils to being labelled academic failures at the ripe old age of eleven. The problem was that Marr did not press him on this, and allowed Farage to turn on the smiling, jocular man-of-the-people persona, thereby laughing off any criticism.

Robinson explained his modus operandi well, and defended his approach soundly. But Farage getting yet another more or less unchallenged gig on the Marr Show does not look good when put alongside accusations that too much attention is being given to Farage – and not enough to the constant stream of fruitcakes that are being unearthed, including UKIP’s own candidates and councillors.

UKIP is proving a problem for the BBC. For how long? That’s up to the BBC, too.
Posted by Tim Fenton at 11:37

There was never a Grammar school in every town even in the good/bad old days. How will all this be paid for? It's plucking policy out of his backside and shame on Andrew Marr for letting him get away with it.

At least he pressed him hard on Mrs Farage's view that he smokes and drinks too much and sleeps too little. As they used to say on Tiswas....This is what the people want!

There was a grammar school in Crewe.

It was crap! No-one, espcially the "careers master", had a clue what the employers of the day needed.