Gove Saved By His Own ... Book

Imagine a future where Government is stuffed full of those whose qualifications for heading Ministries of State rests entirely on their having written reams of low-grade copy for newspapers with pre-defined political agendas, those who have made a career out of shooting their mouths off about how the Liberal Elite do not understand the ordinary, hardworking man and woman in the street. 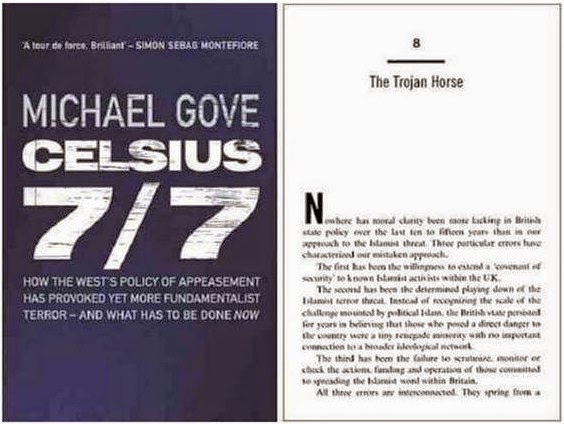 "The Trojan Horse" - what a coincidence

These hacks and pundits know nothing about the niceties of Government, only how to slag it off. Then, by some freak accident, they get hold of the reins of power. All very rapidly goes wrong: programmes go over budget, their ignorance and prejudice is ridiculed, their press pals start to get bored having to talk up what they know to be failure, and the electorate start to realise they’ve been sold a pup.

Well, imagine no more, because that, more or less, is what has been happening since 2010 at the Department for Education (DfE). Michael “Oiky” Gove, a hack who talked the talk but never had any idea how to walk the walk, got into power, fouled up royally, and now not even his friends in the press can help him. But imagine once more: what if he had a cunning plan, just in case the worst happened?

“Whether coincidence or conspiracy, it is a surprise to discover that a key chapter in Michael Gove's 2006 polemical book on the threat of Islamism to Britain, Celsius 7/7, is entitled The Trojan Horse” observed the Guardian at the weekend. Well, well: Gove talks of a Trojan Horse, and then, seven years later, by complete coincidence you understand, it happens. And so his ineptitude is forgotten.

You think I jest? “The views expressed in the book may of course have changed over the past seven years. But the education secretary appears to be a man of consistent political principle and has long subscribed to the ‘Londonistan’ claims of rightwing commentators such as Melanie Phillips and others”. And recent events in Birmingham give every sign of prior orchestration.

The original “Trojan Horse” letter, widely believed to be a hoax. The wave of school inspections. Subsequent leaking of their results to sympathetic, and significantly anti-Muslim, hacks (that would be Gilligan, Gilligan, and Gilligan, but not necessarily in that order), and the sudden ability of Ofsted – now totally devalued and discredited – to move a school from “outstanding” to “inadequate” in just over a year.

Just when it looked as though he was coming unstuck, Gove miraculously becomes Superman. Never mind that evidence of any “Islamist plot” is between thin and non-existent. Never mind the disquiet at the methods used. Never mind the sacrifice of Ofsted as a credible regulatory force. The prophecy of Gove has been vindicated. Never again will those rotten lefties call him a sad little squirt. He is victorious.