While I’m sure the Murdoch empire will vehemently deny that anyone from the top of the organisation leans on the editors of the Sun and Times, both titles have displayed a remarkable unanimity this morning in their coverage of the Hacking Trial, and the partial verdicts handed down yesterday (the jury is still deliberating on charges against Andy Coulson and Clive Goodman). 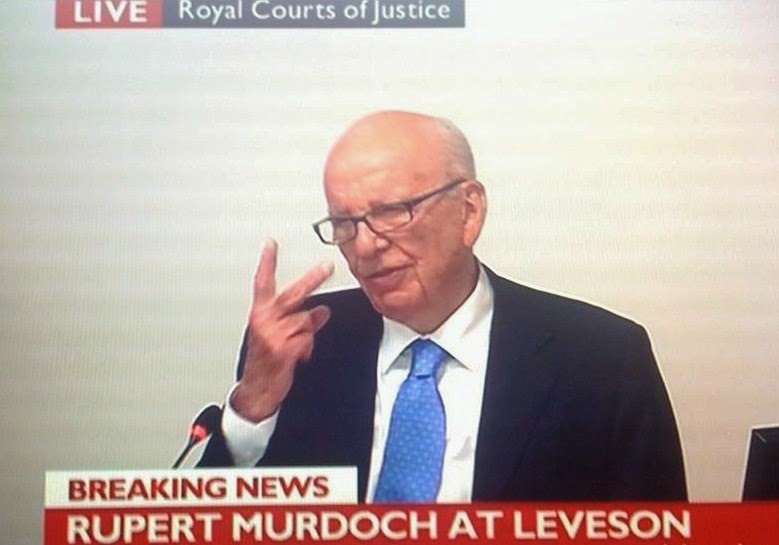 That's what I think of youse bladdy hacking victims, you pommie bastards!

And what both titles want their readers to do is look at the twinkle-toed yet domestically combative Rebekah Brooks, while not looking at Coulson, and certainly not any of the other Murdoch stalwarts who have already ‘fessed up to being involved in phone hacking. On top of that, if you’re expecting Rupe’s troops to say sorry for any of their less than totally ethical behaviour, forget it. 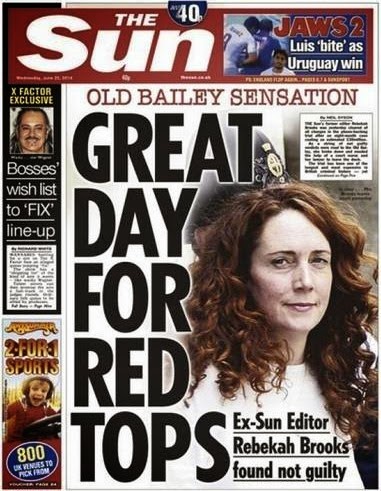 Indeed, the mood in the Super Soaraway Currant Bun is nothing short of triumphalist: “Great Day For Red Tops” screams the headline, under the teaser telling “Old Bailey Sensation”, as if a jury declaring itself unable to convict beyond reasonable doubt is “sensational”, rather than the normal result of due process. Look, readers, she got off, and that’s all you need to know. 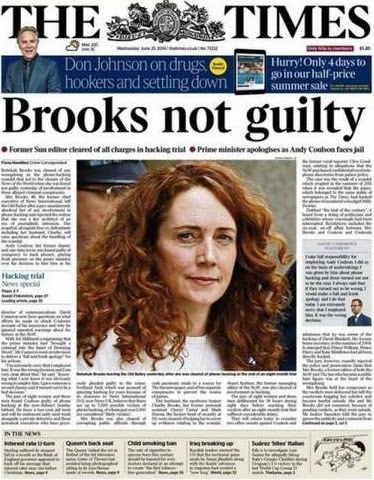 The Times – oh, how far this former paper of record has fallen – wanted its readers to get the same message. “Brooks Not Guilty”, it declared. There is, as with the Sun, a large photo of Ms Brooks, which tells readers that she is the news, and the news is about her. No other thought need enter. This approved line extended to the Usual Suspects among the grovelling punditerati. 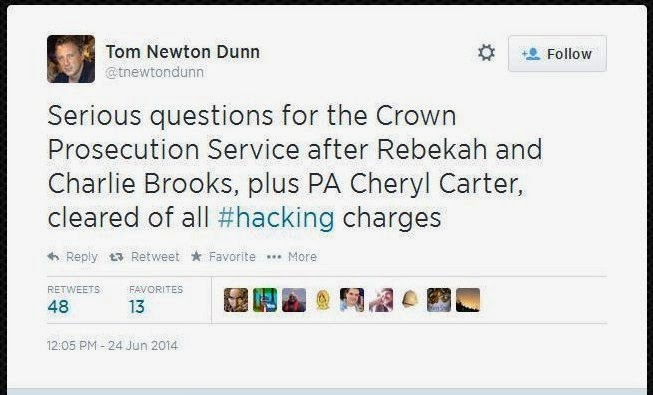 So the Sun’s non-bullying political editor Tom Newton Dunn obediently instructed his Twitter followers to Look Over There: “Serious questions for the Crown Prosecution Service after Rebekah and Charlie Brooks, plus PA Cheryl Carter, cleared of all hacking charges”. No mention of Coulson. No mention of all the others who pleaded guilty, rather than face trial. And no mention of all the victims. 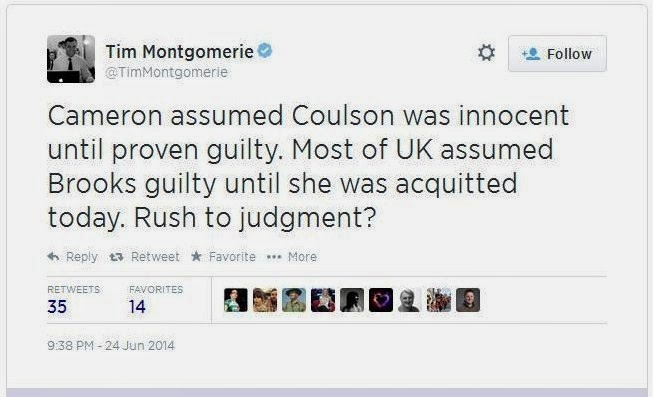 It was also business as usual for the routinely clueless Tim Montgomerie, who also wanted everyone to Look Over There: “Cameron assumed Coulson was innocent until proven guilty. Most of UK assumed Brooks guilty until she was acquitted today. Rush to judgment?” he opined. It wasn’t about Cameron assuming anything, and most of the population probably didn’t have an opinion on Ms Brooks.

Then there was Adam “don’t you know who I am?” Boulton, an appallingly immodest man with much to be modest about, who wanted anyone not yet asleep to also Look Over There: “Rumours Hacked Off about to rename itself Very Hacked Off” he snarked. Laugh? I thought I’d never start. But good to see he still wants an in with the Murdochs and their hangers-on.

Meanwhile, the thousands of hacking victims don’t even get an apology. Sickening.
Posted by Tim Fenton at 11:09

From Dominc Ponsford in Press Gazette:

"But, sadly for those involved, this story is far from over. By my reckoning some 23 journalists charged with criminal offences over the last three years have yet to stand trial. And there are a further 13 arrested journalists still on police bail - including four from Trinity Mirror.

Yesterday was indeed a great day for one red top, but I fear there is much pain yet to come for the red top press."

I suspect some journalists are still "very hacked off"? Plausible deniability still works for some?