The assault by the right-leaning part of the press, that is to say most of it, on Mil The Younger continues today with the personal encouragement of the legendarily foul mouthed Paul Dacre at the Daily Mail. Stepping up to the plate to grovel appropriately before his editor is Andrew Pierce, whose devotion to the Tory Party is so complete that he has named his Twitter handle in its honour. 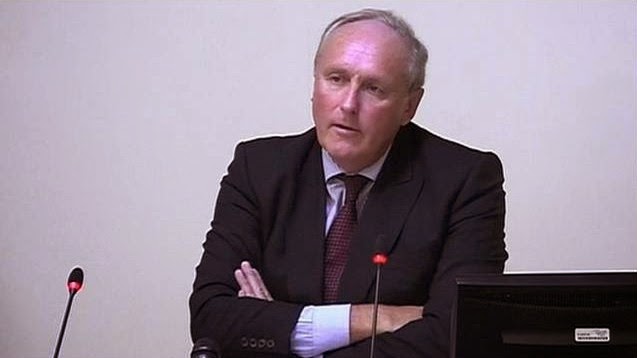 What's f***ing wrong with my hacks ripping off other people's content, c***?!? Er, with the greatest of respect, Mr Jay

The appropriately-named @toryboypierce has, for his hatchet job, chosen to kick Miliband’s media advisor Tom Baldwin, and in a style of zero subtlety. “Red Ed's team and the ghost of David Kelly” screams the headline, followed by “Red Ed Miliband and his deputy Harriet Harman have run a mile from Tony Blair’s loopy claims that the Iraq war was justified”. So loopy that your paper backed them.

But do go on: “The Labour leader stresses that he wasn’t even an MP in 2003 when the war began, and never voted for it. However, Red Ed’s own private office can’t escape close association with one of the darkest episodes of the Blair government’s conduct of the war: the death of government scientist Dr David Kelly”. Ah, we’re playing another game of “Excuse Gilligan”, aren’t we?

Indeed we are: “Tom Baldwin, now Red Ed’s senior media adviser, was the newspaper journalist who named Kelly as the source behind the BBC story by Andrew Gilligan that the Blair government had ‘sexed up’ a dossier about Iraq’s ‘weapons of mass destruction’ to justify war against Saddam Hussein”. As well as saying “Red Ed” rather a lot, but then, Pierce no doubt has his orders.

And do we have Big Al in the mix? You betcha, says Sarah: “Alastair Campbell, who advises Miliband on election strategy and was Blair’s communications chief at the time, wrote in his diaries that releasing Kelly’s name would ‘f*** Gilligan’”. Yes, the old smear that assumes pulling the rug out from under Gilligan caused David Kelly to take his own life. So let me put Pierce straight on this one.

As the deeply subversive Guardian has pointed out, “[Baldwin] hit the headlines in July 2003 when he became one of the first journalists to name David Kelly as Andrew Gilligan's source of information about the dossier into Iraqi weapons of mass destruction” [my emphasis]. Pierce also fails to note Gilligan’s role in having Kelly questioned. And this story is not a new one.

So who did he lift it from? How about “Tom Baldwin’s action as a communications agent for Alastair Campbell started a chain of events which led to the death of David Kelly” written almost three years ago by Tim Montgomerie – now rewarded with a Murdoch staff berth – and which extensively quotes Simon Carr, now working in the service of the perpetually thirsty Paul Staines at the Guido Fawkes blog.

You want derivative, badly sourced and slanted rubbish? Pierce is your man.
Posted by Tim Fenton at 13:13

Re: The Blogs Complaints Commission... your concluding paragraph on this article included names that rang a bell:

...written almost three years ago by Tim Montgomerie – now rewarded with a Murdoch staff berth – and which extensively quotes Simon Carr, now working in the service of the perpetually thirsty Paul Staines at the Guido Fawkes blog.

Was this the same Tim Montgomerie who appeared at Leveson?

Do we need a blog complaints commission?
r to return or tab to continue.

Bloggers have come under the spotlight at the Leveson inquiry into press standards, with questions raised over the lack of regulation in the blogosphere.

Paul Waugh, editor of politicshome.com and ConservativeHome editor Tim Montgomerie discuss how free bloggers should be to say what they like.